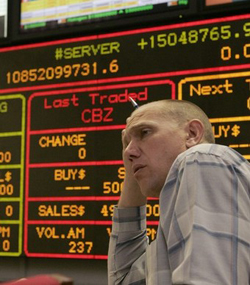 PG INDUSTRIES which recorded a third consecutive annual loss since the dollarization in 2009 despite disposing of non-core assets in order to reduce short-term debts, has said sales increased 21 percent to US$14,3 million in the five months to May.
Chief Executive Hillary Munyati said the group had reduced its shareholding in Manica Board & Doors with the proceeds used to restore credibility with the funders.
He however, said there had not been any progress in selling properties identified as excess to the group because of the prevailing environment.
“The group was in the process of reducing staff levels by 25 percent with negotiations to that effect having started this month and should be concluded in the third quarter,” Munyati said.
The group said improved performance during the first five months of the year had been achieved against a background of low consumer demand and tightening liquidity conditions.
At PG Building supplies, sales were 28 percent up following the coming in of Sherwood International although Munyati noted that stock levels were still far from satisfactory despite a notable improvement.
Last year, the PG signed a 3-year business process outsourcing agreement with Sherwood International South Africa to improve the group’s merchandising division.
Zimtile sales had gone up 47 percent with Munyati adding that the group had cemented its position as a trusted brand and was now well-placed to weather competition from new entrants and cheap imports.
PG Timbers sales were down nine percent after the group took a decision to focus mainly on projects driven sales due to the lack of funding. Glass was up 34percent and margins were maintained while Mozambique was six percent ahead in US dollar terms.
Over the year ending December 31 2012, the group recorded a loss of US$7,9 compared to US$5,5 million loss in the previous year.
Management said the group had continued to face working capital constraints which had given rise to significant doubt over the company’s ability to continue as a going concern.
Consolidated net sales declined by 15,3 percent from US$39,6 million in 2011 to US$33,5 million during the period under review.
This was attributed to the fall in PG Merchandising volumes and the non-consolidation of the Manica Boards and Doors, a subsidiary in which PG Industries shareholding was reduced from 60 percent to 27,9 percent last year.Advertisement

“The remaining investment was accounted for as an associate company. Share of loss of associate amounted to US$959 415,” the group said.
Shareholders approved the disposal of the associate company with a book value of US$2,4 million in December last year.