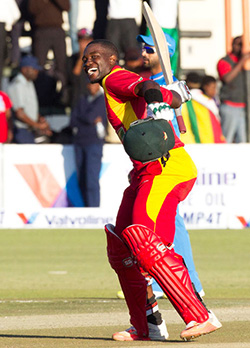 Big picture
INDIA have achieved their main goal – sealing the series – so the third and final ODI provides scope for blooding a couple of uncapped players. Zimbabwe, who are in the midst of an eight-match ODI losing streak, have little but pride to play for.
Individually, Zimbabwe’s players have shown that this team definitely contains talent. But they haven’t been able to pull all three facets of the game together.
In both matches so far, India were offered a glimpse of Zimbabwe’s weaknesses, and despite the fine margin of their victory on Friday, they have generally looked the better side.
Yet one feels Zimbabwe aren’t all that far behind this Indian team. Given a fully fit squad, in home conditions, at least one win is a distinct possibility.
Unfortunately, the Zimbabweans have been hobbled by injury and have probably already blown their best chance of breaking their losing streak. Sean Williams is nursing a knee problem and is unlikely to play on Tuesday.
While the bowling has fired, India’s middle order still appears vulnerable. Manoj Tiwary, Robin Uthappa and Kedar Jadhav have managed a combined 58 runs in a total of six innings.
If Zimbabwe are able to exploit this, especially given the absence of the series’ leading run-scorer Ambati Rayudu, they may yet be able to pull off a win.
In the spotlight
In the absence of Solomon Mire, and with Elton Chigumbura playing primarily as a batsman, Zimbabwe needed an all-rounder to balance their side.
They appear to have found one in Chamu Chibhabha, who has contributed with both bat and ball in this series. Batting is his stronger suit – he’s averaged 44.42 in ODIs in 2015 – but the pitch at Harare Sports Club also suits his medium-pace bowling.
The pressure is building on India’s middle-order batsmen. With this series billed as something of an audition for a slot in the first XI, Manoj Tiwary, Robin Uthappa and Kedar Jadhav have averaged 12.00, 6.50 and 10.00 respectively. India have still managed to win both games, but they’ll want more from this trio in the final match.
Team news
Zimbabwe’s hand has been forced by injuries to key members of their squad. Opening bowler Tinashe Panyangara sustained a side strain in the first match, and batsman Sean Williams injured his right knee in the second.Advertisement

With the help of painkillers and heavy strapping, Williams batted during Zimbabwe’s chase, but team physio Anesu Mupotaringa suspects patella tendonitis. Williams went for scans on Monday morning and it’s unlikely the team management will risk aggravating his injury.
So Zimbabwe may want to give players such as Chris Mpofu, Prosper Utseya and Roy Kaia a run. Craig Ervine may also be back to full fitness, as he underwent a test, including sprints, with no apparent discomfort on Monday afternoon.
Zimbabwe (probable): 1 Vusi Sibanda, 2 Chamu Chibhabha, 3 Hamilton Masakada, 4 Elton Chigumbura (capt), 5 Roy Kaia/Craig Ervine, 6 Sikandar Raza, 7 Richmond Mutumbami (wk), 8 Prosper Utseya, 9 Graeme Cremer, 10 Neville Madziva, 11 Chris Mpofu.
Quotes
“We’re just going to go out there and play for pride, and for our supporters as well.”
Chamu Chibhabha believes Zimbabwe still have something to play for, despite the series being lost.
“I asked him why I was being congratulated and he told me I had been selected to the Indian team.”
Sanju Samson was surprised to be informed of his selection by Kerala Cricket Association president TC Mathew.
Liam Brickhill is a freelance journalist based in Cape Town