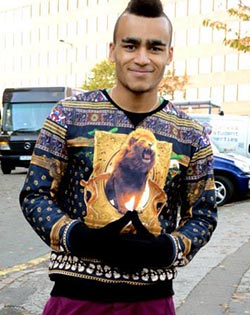 UNIVERSITY of Sheffield student Munyaradzi Chiwawa can be on the red carpet at London’s O2 Arena on February 18 presenting the 2014 Brit Awards, the UK’s equivalent of America’s Grammys – if you vote for him.
The final year psychology student is one of three finalists shortlisted to present the awards for YouTube channel Transmitter which was launched last year by British music labels to promote UK artists with the backing of top acts such as Tinie Tempah, The Saturdays, James Arthur, Wretch 32 and The Wanted.
Of the three “TransBRITter Finalists”, Munya has the most “hits” and can achieve his dream with your support.
He explained to NewZimbabwe.com why this opportunity is important for him:  “The reason I want this opportunity is because I’ve been on a personal journey to prove to myself that I can be the best- and now, I feel ready to show that to world and to the believe who have believed in me right from the start.
“People in Zimbabwe expect those who go abroad to become something better; to find the better life – I want to show that that can happen, not by virtue of where you are, but by the existence of a dream and the relentless pursuit to achieve it.”
Munya said he has worked hard over the years and believes the Brits present him with the much-needed chance to break into the notoriously cutthroat showbiz industry.
“All I needed was one shot; one platform to prove it,” he said.
“I made the phrase ‘I’ll lay down the magic, if you provide the platform’.  Suddenly, the opportunity came – a chance to present on the red carpet, in front of the nation- at The Brit Awards.
“My audition made it into the top 4 in the country, and now here I am- fighting in these last few hours to secure my spot on the platform, so I can take that leap to the dream.”
Making it to the final three “TransBRITters” is the culmination of hard grafting since he moved to the UK for his high school and university education.
“Having moved over to England, I took part in public speaking competitions, eventually winning the regional final in the Norwich ‘Youth Speaks’ public speaking contest. I displayed the same confidence and character in high school – again, leading to my election as Head Student in Notre Dame High School,” he said.
“When I arrived at university in 2011 – I soon realised that despite being one of 20,000 students – I wanted to be more than just another student. I challenged myself and asked the question ‘If you had one dream, one chance of success, what would that leap of faith be?’ The answer was presenting; working in television.Advertisement

“I badgered the university media team, eventually securing myself more and more opportunities to present. I was elected a committee member – enabling me to start to produce my own online TV shows and radio shows. As more ideas came to mind, I started to produce independent shows of my own, features no one had seen before.
“Now, in my final year – I found myself becoming Assistant Station Manager of (the university’s) Forge Television. I was bolder and more audacious, leaping at opportunities to interview celebrities and never backing down from an opportunity. I had worked so hard, for so long – that I stood by the belief that I was good at what I did; perhaps the best.”
But the realisation that his future was in the media, and television in particular, came at an early age back in Zimbabwe.
“I realised very early in my life that being on camera was something I loved,” he said.
“When living in Zimbabwe, my mother used to film us and send footage of our adventures to my grandparents in England. I would constantly pester my mother to let us watch the tape – so enthralled by the prospect of being the person on the screen before me.
“Indeed, this became manifested as a passion to be in front of people. In primary school, I showed the charisma and leadership to be elected as Head Boy of Twin Rivers School, Harare- after numerous plays and poetry competitions and singing events I took part in.”
If you believe Munya deserves this opportunity you can give him the “thumbs up” on YouTube before voting closes at 1700 hours on Friday, February 7, 2014.
“People who want to vote can use a YouTube account, or simply log in with a Gmail address. If you struggle to find the link- type ‘Transbritter Munya’ into YouTube – and my face will appear,” he said.
“Tomorrow (Friday) will be the make or break of this competition – so any support you can give would be fantastic and deeply appreciated.”
TransBRITter Audition | Munya Chawawa