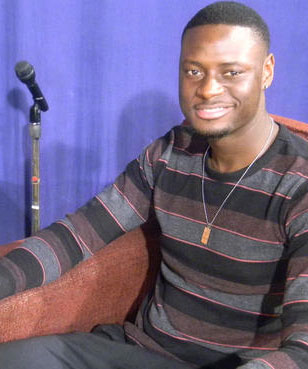 EMMANUEL Machena, 20, a Missouri Valley College (MVC) freshman, captured the Valley Idol crown with two electrifying performances on the Eckilson-Mabee Theater stage.
Machena, a Zimbabwean, brought the MVC crowd to their feet after completing his cover of Drake’s “Hold On, We’re Going Home” and a song he wrote himself called “Fighting For Your Love.”
He was the only competitor in the event to perform one of his own songs.
Machena said he is inspired by the music John Mayer writes.
“He had a different way of portraying music in a way you can actually see what he’s talking about,” Machena said.
The anticipation of the crowd before he performs is something he yearns for. He said one of the best feelings at Valley Idol was when he delivered a song and it brought the crowd to a roar.
Working hard
He said it was humbling to know people appreciate his music and it inspires him to keep working harder as a musician.
Valley Idol began with 11 first round contestants who were given a choice of one song to perform in the first round of competition. Judges would then vote for six final round singers.
The final round featured Machena alongside Ramone Hall, Emma Quinlan, Justin Weathers, Wade Aylett and Taylor Peeckson.
Each performer was given two songs in the finale of Valley Idol. This time the vote was left up to the MVC crowd.
Back in Zimbabwe, Machena sang in restaurants where he got paid for his performances. He owed his success in Valley Idol to the experience he had singing in front of people over that time.
“I sort of get into a zone where I don’t even look at the audience, but I make them feel what I am doing,” he explained.
Machena became interested in music when he started playing the drums around the age of seven.
Singing in church
Later on in his life, Machena auditioned for a singing group spot at a local church service at the age of 15, when he began to take singing more seriously.
“I just thought I could keep a note like most people,” Machena said of his thought process coming into his church audition.
When Machena auditioned, he said he barely got in to the group but as time went on he got to lead a song in his church service. He said it was the first time he realized he had the gift of song.Advertisement

Machena is a dual threat musician who shifted his time to playing the guitar around the time he became serious about singing.
He said there aren’t too many drummers who sing and thought guitar would better compliment his voice.
Although Machena triumphed at Valley Idol, he still pushes to practice and improve on his musical skills.
“Many people come and tell me, ‘You don’t know how good you are,'” said Machena.
He said he has received a lot of support from his mother because she wants to be there for him every time he sings. His friends also inspire him to keep striding for a future in the music business.
“They believe that the sky is not the limit. There is so much more after that,” Machena said.
His favorite types of music include soul, rhythm and blues, rap and blues. He enjoys music from artists such as Tank, Chris Brown, John Mayer, etc.
Part-time activity
He takes bits and pieces from the artists he listens to and applies them into his singing and song writing.
Although Machena has a passion for music, he views it as a part-time activity. He stresses the idea of studying hard and getting a good education in school.
As an accounting and finance major, the classroom is a place he can create multiple career options for himself.
Machena said winning Valley Idol was a great achievement in his career but he wants to compare himself to the best musical artists in the world.
In order to get to the global stage he said he has a long way to go before it gets there.
He said he has been blessed by hanging around friends who are musically talented. They push him to become a better musician.
From Zimbabwe to Missouri Valley College, Emmanuel Machena is letting his voice be heard. He is Valley Idol 2013.