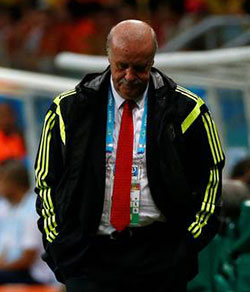 SPAIN coach Vicente del Bosque refused to single out any of his stunned players for blame after the holders crashed to a shocking 5-1 reverse to Netherlands in their World Cup Group B opener on Friday.
Spain took the lead in Salvador through a 27th-minute Xabi Alonso penalty before Robin van Persie levelled a minute before halftime but the ragged world and European champions were outplayed by the Dutch in the second period.
It was their worst defeat at a World Cup since they lost 6-1 to Brazil in 1950 and only their fourth competitive loss under Del Bosque since he took over at the end of 2008.
“It’s certainly not a happy moment for us,” Del Bosque told a news conference.
“As a sportsman, I’d like to congratulate the Dutch side, they overwhelmed us in the second half,” added the 63-year-old.
“At this point it’s not time to point fingers of blame. We are all to blame.
“We have to look ahead and go to our next match and secure a win against Chile.”

Spain can take a small scrap of comfort from the fact that they also lost their opening group game, a 1-0 defeat to Switzerland, on the way to winning their debut world title in South Africa four years ago, when they beat the Dutch 1-0 in the final.
However, it will be harder for them to recover from Friday’s reverse, the biggest defeat for a defending champion in the opening game at the following tournament.
“Of course a defeat hurts and is painful for both those on and off the pitch,” Del Bosque said.
“We’ve had a chat in the dressing room, a positive one, good for them. We have time to discuss things further.
“I feel very upset and disappointed but I have enough experience to understand this defeat.”
Del Bosque noted that if a David Silva effort had not been brilliantly stopped by Dutch keeper Jasper Cillessen moments before Van Persie equalised, Spain would likely have been leading 2-0 at the break.
“It wasn’t a question of physical fitness, when the Dutch scored the second goal we dropped our heads and became a little despondent.
“There were very specific moments in the match, especially Silva’s chance and then immediately the Dutch equalised.
“I can’t find words to explain five goals. We have never been a very defensive side but always coped well defending. Today we’ve been very weak in defence.”Advertisement

Spain can get their title defence back on track when they play Chile on Wednesday.