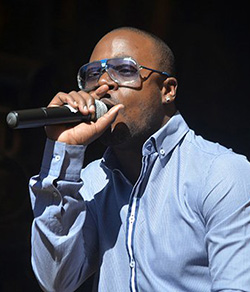 HIP hop star Desmond Chideme popularly known as Stunner has been issued with a warrant of arrest after he absconded a court hearing this Tuesday.
Harare Magistrate Nomsa Sabarauta, who expected Stunner to answer to two counts of negligent driving and driving without a licence emanating from a pile-up accident he caused four months ago, said Tuesday that the 36-year-old rapper’s no-show at court left the state with no option but to place him on arrest.
Representing the state, prosecutor Devoted Gwashavanhu-Nygano argued that Stunner offended State laws when he drove the car without a licence and at excessive speed knowing well it would compromise his judgements, vehicle control and cause accidents.
“On the 20th day of June 2016 at around 1500 hours, the accused drove a motor vehicle namely Toyota Lexus registration ADG 3577 along Jason Moyo while not being a holder of a drivers licence … he also drove negligently,” read the state outline.
According to state, apart from inflicting injuries on two pedestrians, namely Douglas Sachikonye who sustained a fractured pelvis and Norest Murungweni who sustained minor injuries, Stunner’s car rammed into four parked vehicles namely a VW Golf, Toyota Rav 4, Toyota Tercel and Toyota Hilux causing serious damages. An Old Mutual building on which the car rested was also damaged.
Speeding, failing to stop or act reasonably when collision seemed imminent, failing to keep a proper look-out and failing to control the vehicle are the components of the charge on negligent driving according to Stunner’s charge sheet.
The flamboyant singer was catapulted to prominence after his sex tape with socialite and former Big Brother housemate Pokello Nare went viral.Advertisement