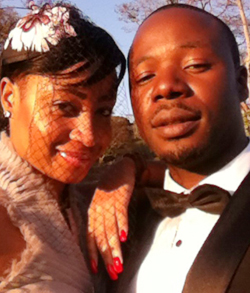 THE singer Stunner has told of his terror after a snake tried to enter his hotel room.
The Godo singer, real name Desmond Chideme, was enjoying a morning lie-in at a lodge in Gokwe on Friday after a gig the previous night when the reptile was seen slithering towards his open window.
He later told fans on Twitter: “Imagine wakakotsira and u jus hear some mdara shouting ‘nyoka yakupinda mumba’. I’m glad I had clothes on.”

Stunner posted a picture of the 1.5 meter-long brown and gold reptile – thought to be a type of cobra – after it was killed.
He told New Zimbabwe.com: “It’s very hot in Gokwe so I had my window open and I was just lying on top of the blankets when suddenly I heard someone shout that a snake was getting into the room.
“I got up and raced outside to find the hotel caretaker throwing stones at the snake.
“My mate Shastro was also there and looked a bit scared; the snake was hissing and showing its fangs. After the early shock, I found it fun and exciting. That was my first real snake sighting.”
The snake was cornered after it tried to escape over a polished floor, slowing down its progress.
Stunner admitted throwing a few stones at the snake, but the singer is not sure if he struck the fatal blow to the snake’s head.
The 33-year-old is currently dating Harare socialite and fashion designer, Pokello Nare.Advertisement