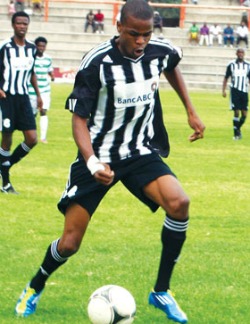 HIGHLANDERS reached the semi-finals of the Mbada Diamonds Cup in style on Sunday, dismantling Buffaloes 3-0 in a quarterfinal match played at Mucheke Stadium in Masvingo.
Having exited the competition in the first round in 2011 and at the quarterfinal stage last season, the Bulawayo giants needed a timely substitution in the second half and a seven minute three-goal blitz sent them into Friday’s semi-final draw.
Mthulisi Maphosa, Masimba Mambare and Milton Ncube were the scorers as Kelvin Kaindu’s side stayed in the hunt for a league and cup double as they sit second in the Castle Premiership.
Highlanders settled first with Mambare heading over the bar in the seventh minute before Steven Sibanda shot wide at the other end for Buffaloes. Sibanda was presented with another chance two minutes later but his effort was smothered by Highlanders goalkeeper Munyaradzi Diya.
Mambare then came face to face with goalkeeper Blessing Mandimutsira but struck him on the chest while Njabulo Ncube’s effort from the rebound went wide.
Buffaloes almost responded immediately but captain Prosper Matizanadzo saw his effort go wide after he had been allowed space on the edge of the box.
A ferocious free kick by Bheki Ncube was punched back into play on the half hour before Mambare’s stinging curler was also pushed away by the goalkeeper.
Bheki Ncube had seemingly thrust Bosso into the lead in the 43rd minute from a corner delivered by Bruce Kangwa but referee Nomore Musundire adjudged that there had been a foul on goalkeeper Blessing Mandimutsira before the goal was scored.
Then an inspired substitution by Kaindu in the 53rd minute and on the hour changed things for Bosso. Beven Chikaka came in for Njabulo Ncube while Maphosa replaced Simon Munawa, who seemed to struggle with his game in the middle of the park in the absence of the more combative and attacking of Peter ‘Rio’ Moyo.
With Kangwa running hard on the left, Maphosa positioned himself well in the box for a cross in the 62nd minute that he neatly placed past Mandimutsira to break the deadlock.
While Buffaloes were still trying to recover, Gabriel Nyoni, a nuisance to the Buffaloes defence all afternoon, dummied Themba Ndlovu and laid the ball to Chikaka. Chikaka in turn found Mambare who coolly slotted home.Advertisement

Then in the 70th minute, Kaindu added more firepower to the Highlanders attack in a bid to extinguish any Buffaloes comeback hopes when he brought in Milton Ncube for Bheki Ncube.
And with his first touch of the ball, Milton headed home under close challenge from Matizanadzo and Ndlovu to make it 3-0.
Said Kaindu after the match: “I am very happy with the way we played in the second half and finally reaching the semi-finals. I hope we will go all the way because this was not an easy match if you saw how they closed us down in the first half.”
Buffaloes coach Timothy Masachi said they had lost to a better team. “We lost to a better team and we should go back to the drawing board and fight for a better finish in the league.”
In the league matches this season, Highlanders thumped Buffaloes 3-0 at Barbourfields before last week’s 1-1 draw at Sakubva.