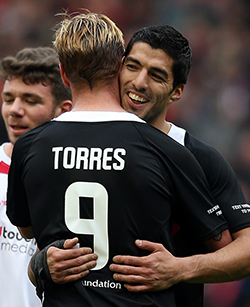 LUIS Suarez graced the Anfield turf again on Sunday and vowed that if he ever returned to England, it would only be to play for Liverpool.
The Uruguayan forward was back on his old ground for the first time since his summer move to Barcelona to play a part in the Liverpool FC Foundation All-Star charity match between teams picked by Steven Gerrard and Jamie Carragher.
He came on as a half-time substitute alongside another ex-Reds hero Fernando Torres, with the two delaying their entrance before being met with huge cheers from those in attendance.
Suarez had an impact too, winning a penalty off Carragher moments after nutmegging him, and Gerrard netted that spot-kick to go with his earlier 12-yard conversion in a game which finished 2-2.
The 28-year-old led the lap of honour with Liverpool’s club captain after the match and told LFCTV that were he to return to the Barclays Premier League, Anfield would be his only destination.
“You never know in football what the future holds, but if I ever play in England again I will play for the Liverpool team and not another team,” he said.
It was no surprise to see Suarez receive such adulation from the Reds faithful after a goal-laden three-and-a-half-year spell with the club.
And while he is forging his own reputation in Barcelona now, he still fondly remembers his spell in England.
“I’ve missed the fans,” added Suarez, who scored the winner in El Clasico against Real Madrid seven days ago.
“The atmosphere is unbelievable, it’s amazing. Everyone who’s played for Liverpool knows how important the supporters are. They know they are in my heart.”
Torres himself may have been more taken aback by the positive reception he received, though, after initially souring his relationship with Liverpool fans when he left for Chelsea in 2011.

However, any fears he may have had about supporters still holding a grudge were allayed when his name was read out to cheers before the game and the Spaniard’s name was chanted by the Kop in the second half.
“It was very emotional, I didn’t know how to react,” he added on Liverpoolfc.com. “I wasn’t expecting them to sing the song.
“I still remember the great games we had here at Anfield in the Champions League, in the league and fighting for trophies. I have the song in my head, it was so important for me.Advertisement

“Those three-and-a-half years changed my entire life and career. I remember the song from the Kop in important games. To hear that once again is something I will never, ever forget.”
Carragher’s team had gone two goals ahead through Mario Balotelli and Chelsea’s Didier Drogba before Gerrard, playing on the same ground where he earned his rapid dismissal against Manchester United a week ago, slotted home his two spot-kicks to ensure a draw.