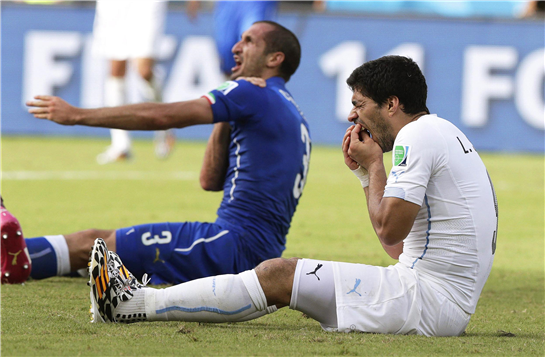 URUGUAY President Jose Mujica has slammed FIFA for their treatment on Luis Suarez, claiming the striker needs help not a ban.
The Barcelona forward is banned from football for four months after biting Giorgio Chiellini during the Celestes’ match with Italy at the World Cup.
But the nation’s leader believes that the goal-scorer is in need of a psychiatrist.
“He comes from a poor background and his main intelligence is in his feet,” Mujica told Folha de Sao Paulo.
“It’s better to take him to hospital and once there, see a psychiatrist.
“I’m not disputing the sporting sanctions, they’re fine. What I’m disputing is that there are certain things that shouldn’t have anything to do with the ban.
“The fact he can’t go on any football pitch, that he can’t be with any of his team-mates in the national team, he can’t go to a football stadium or even support a charity event linked with football.
“It’s crazy! Not even a government can prohibit someone from entering a football stadium, without the signature of a judge.
“Then FIFA come along and say he can’t do that for four months… without even a legal tribunal.
“I believe Fifa have a mentality of old people.
“They want to appear as though they’re learning from their mistakes, but never do.
“The only thing they generate is hatred and resentment. What this lad needs is someone to give him a helping hand.
“Now we’ll get to see [Suarez] playing alongside Neymar and [Lionel] Messi. We don’t know when that will be, though.”Advertisement