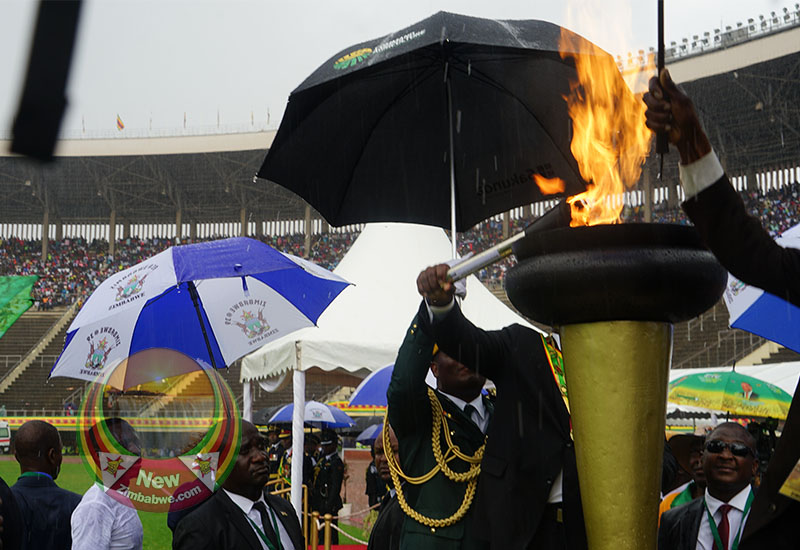 The Zanu PF leader, had to brave pouring rain to inspect a guard of honour mounted by a combination of the army, police and prison services at a half-full National Sports Stadium in Harare.

The event, was attended by mainly Zanu PF supporters and members of the apostolic sect draped in flowing white garments who cheered Mnangagwa through his 40-minutes-speech.

Mnangagwa, who came to power on the back of a military coup in November 2017 before winning a disputed election in August last year, like his predecessor former President Robert Mugabe, arrived in a custom-made limousine swarmed by heavily armed soldiers and close security aides, his wife First Lady Auxilia in tow.

With his government under pressure to deliver social services, in the wake of a spate of price hikes of basic commodities, Mnangagwa took the chance to lash out at producers describing the increases as “inhumane and unpatriotic”.

The President called on manufacturers of goods and services to have a human face in their dealings with the public and not resort to profiteering.

Bakers increased bread prices from RTGS$2 to RTGS$3 this week, after government announced a hike in the producer price of grain by 70 percent.

A 10kg bag of the staple maize meal which cost around RTGS$5 is now going for RTGS$15.

While celebrations went on at main centres across the country, most people in Harare seemed oblivious to the significance of the day.

The President also took time to respond to questions around his government’s move to compensate white former commercial farmers whose land was expropriated by government.

“I want to once again re-assure our citizens, that the land reform programme is irreversible…we fought for the land and we will never ever regret taking back our land.

“Neither will we ever betray our fellow comrades who paid the supreme sacrifice for this land and now lie buried in marked and unmarked graves within our borders and beyond,” he said.

Mnangagwa has been criticised for compensating the farmers with some describing him as a sell-out.

He however, added: “Our constitution binds us to compensation in respect to improvements effected on the land before acquisition, this will be done as and when resources are available.”

With senior Zanu PF and government leaders reportedly having allocated themselves large tracts of land under the chaotic land redistribution programme, Mnangagwa revealed a Land Audit report will be made public soon.

Harare Mayor, Herbert Gomba as the only high profile opposition politician to attend the event.