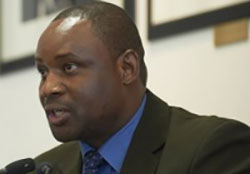 SINCE 1977 when he controversially landed the leadership of Zanu PF, President Robert Mugabe deliberately avoided grooming a successor. In his insidious or at least unannounced quest to become life president of both ZANU PF and Zimbabwe, he cunningly kept those on the queue perpetually guessing and in abeyance while he continued to entrench himself in power.
Some thought they were so near yet they were so far. Emmerson Mnangagwa is one of those that have been in the queue for decades. At one point, Eddison Zvobgo could imagine assuming the coveted title of President of Zimbabwe. In 2004, Joice Mujuru was also thrown into the fray though it is becoming increasingly evident that President Mugabe is only interested in succeeding himself. As for what happens when he eventually goes as is imminent, he doesn’t seem to care much.  Zimbabweans must come together and put an end to this circus, not only for our sake but for posterity.
Those who are familiar with the dynamics of change management will admit that if you don’t manage change, change will manage you. President Mugabe had 37 long years to put in place an effective succession planning agenda but he blew up his chances. Obsessed with power, he could not imagine anybody else other than him leading Zanu PF and running the country. In the process, he perfected the art of patrimonialism and patronage where ministers were reduced to the level of primary school group leaders or secondary school class monitors with just a tittle, a fleet of luxurious cars and a raft of ministerial benefits but nothing more. He directly ran every ministry as if it was his private business and reduced parliament to a rubber-stamping talk shop.
Kamuzu Banda, for all his failings, did one thing very well; he did not hide his passion or agenda for a life presidency. He made it official even though the tsunami of change eventually wiped him away. Mobutu of Zaire, Kaunda of Zambia and many others we can think of, believed in nobody else except themselves. They equally disregarded realities of change management and succession planning. Their fate and that of their respective parties is well known. This is what happens when leaders fail to see and plan beyond their own leadership.
Contrast that with Botswana, Namibia, South Africa, Mozambique, Ghana and a few other countries on the African continent that have fully embraced succession planning and leadership renewal.  The ANC has changed hands many times – from Walter Sisulu to Nelson Mandela and soon it will be Cyril Ramaphosa. We are slowly getting to a point where one has to visit the nearest library or search on google in order to remember all of South Africa’s black presidents or those of Botswana. Some of our children born after independence have no clue who Samora Machel, Sam Nujoma or Seretse Khama were. It is not a mere coincidence or ominous accident that those countries that have renewed their top leadership periodically and systematically, have also enjoyed steady economic growth including even Mozambique.Advertisement

Why is it that in Zimbabwe, despite our levels of literacy that are believed to be way above the African average, we are still stuck with one sekuru from Zvimba? What’s so special about President Mugabe? I don’t think he is anywhere near Kwame Nkrumah, Julius Nyerere, Nelson Mandela, Samora Machel, Kenneth Kaunda, Milton Obote or Joshua Nkomo; Africa’s true and genuine liberators and nationalists. That he has outlived all of them except one, does not make him the greatest. Maybe it’s true when elders say “munhu akanaka haararami” – long life is not for the good natured.
Given what is happening in Zanu PF at the moment, it is clear that President Mugabe is now more of a spectator than central actor. Things are now way beyond his control and understandably so, given his advanced age. For decades, he squandered the opportunity to reform Zanu PF into a modern democratic party. Somebody forgot to remind him that the war ended way back in 1979! It’s not surprising, therefore, to see contestants and blue-eyed boys and girls playing political games even with his own wife. There is nothing special about Grace Mugabe’s entry into politics except that she is being used as a pawn by those who have been in the queue for far too long; yava shaishano – malice at its best.
One of the world’s richest men, Bill Gates, voluntarily stepped down from the chairmanship of Microsoft leaving Satya Nadellain charge. Gates has since shifted his focus to charity and yet Microsoft continues to make billions in profit. If Bill Gates was Robert Mugabe or some other African leader, he would have preferred to die at the helm of Microsoft. What’s wrong with us Africans?
The world’s two major mining companies, BHP and Rio Tinto, changed guard at the top not long ago. They replaced their respective CEOs with candidates from within their organisations. The two companies continue to post billions in profit. These are some of the benefits of succession planning. Even North Korea, one of the most brutal dictatorships on earth, has succession planning. The Chinese, despite their autocratic system, still renew their leadership every ten years. In Zimbabwe, it has been Mugabe, Mugabe and Mugabe year after year after year, how bizarre!
Our nation is greater than any individual. Come 2018, let us banish the era of entitlement, impunity, leadership perpetuity and recycling to the dustbin of history. Let Zimbabwe rise and shine, under a new crop of leadership. We have an abundance of talented citizens in Zimbabwe and around the world who can move our country forward. Let us turn the corner and open a new page with a young, trustworthy, untainted, energetic and focused leadership in the cockpit. Zanu PF has had its chance but they flunked it. Madiba called it tragic failure of leadership.
Moses Chamboko is a pro-democracy activist and Interim Secretary General for Zimbabweans United for Democracy (ZUNDE). He writes in his personal capacity. You may visit ZUNDE at www.zunde.org or email info@zunde.org