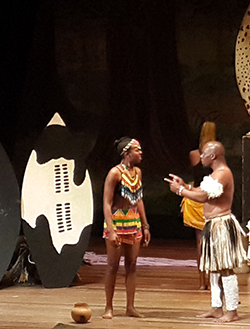 UMBIKO kaMadlenya, a stage play adapted from a popular Ndebele novel of the same title premiered at the Bulawayo Theatre as part of Intwasa Arts Festival KoBulawayo.
The novel was written by Manford Sibanda in 1981.
Bulawayo based playwright Thabani Moyo rewrote the story into a stage play, looking at the crises of succession that resulted after King Mzilikazi’s death.
The play featuring an impressive 25 member cast made up of some of the best talent from Bulawayo was directed by Nelson Mapako.
Veteran actor Memory Kumbota, plays the role of Mbiko Masuku, a powerful warrior who was respected throughout the kingdom.
A National University of Science and Technology student, Bathabile Dlamini, plays the role of Mbiko’s wife Zinkabi, one of Mzilikazi’s daughters.
The play aptly captures a significant period in the history of the migrant Ndebele nation, a year after the death of the founding king of the state, Mzilikazi.
The state remained without a king for two years after the heir apparent, Nkulumane, one of Mzilikazi’s sons ‘disappeared’ leaving a void that caused confusion that threatened to tear the Mthwakazi state apart.
The novel records that Nkulumane, was sent back to the then Zululand by his father Mzilikazi, who was livid that the former had been installed king by some chiefs who thought Mzilikazi had died on their way to present Zimbabwe.
Gundwane and some of the other chiefs then decide to appoint Lobengula as the new king, a decision that riles Mbiko and his Zinkabi.
Mbiko attempts to lead an uprising against the new king, Lobengula but is defeated. Zinkabi, who was pushing Mbiko to dethrone Lobengula, eventually commits suicide.
While the play and the novel capture events that happened in the 19th century, the issue of political succession is relevant in the present political landscape with many political parties, especially in Zimbabwe, grappling with succession issues. Advertisement