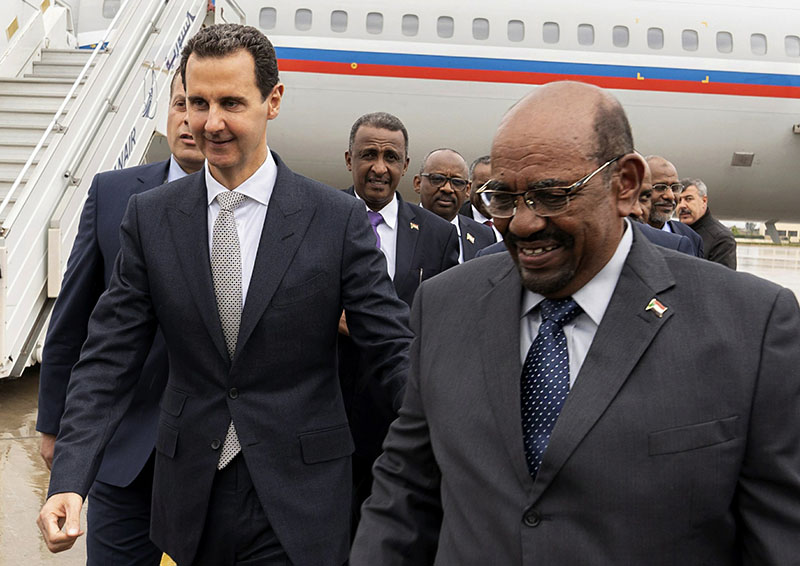 Omar al-Bashir was greeted at the Damascus airport by Syrian President Bashar Assad before they both headed to the presidential palace, where they held talks on bilateral relations and the latest developments in Syria and the region, according to the state-run news agency.

Syria was expelled from the 22-member Arab League soon after war broke out in 2011. Arab countries have sanctioned Damascus and condemned Assad for using overwhelming military force and failing to negotiate with the opposition.

The reason for al-Bashir’s visit was not immediately clear. But with the war in Syria winding down in favour of Assad as his troops recapture key cities and population centres, some Arab officials have expressed interest in exploring the restoration of ties.

In October, Assad told a little-known Kuwaiti newspaper that Syria had reached a “major understanding” with Arab states after years of hostility. He did not name the Arab countries in the interview, which was his first with a Gulf paper since the war erupted, but he said Arab and Western delegations had begun visiting Syria to prepare for the reopening of diplomatic and other missions.

The interview came on the heels of a surprisingly warm meeting between the Syrian foreign minister and his Bahraini counterpart on the sidelines of the U.N. General Assembly in September in New York. The meeting turned heads because it featured hugs between the two ministers.

The encounter raised questions about whether the Gulf countries, most of them sworn enemies of Assad ally Iran, are reconsidering their relations with Syria.

The Syrian state news agency SANA quoted the Sudanese president as saying during the meeting with Assad that he hopes Syria will recover its important role in the region as soon as possible. He also affirmed Sudan’s readiness to provide all that it can to support Syria’s territorial integrity.

SANA said Assad thanked al-Bashir for his visit, asserting that it will give strong momentum for restoring relations between the two countries “to the way it was before the war on Syria.”

Photographs transmitted by SANA showed the two leaders shaking hands at the airport in front of a Russian plane that appears to have brought al-Bashir to Syria. Russia, a key ally of Assad, maintains an airbase southeast of the Syrian city of Latakia.

Al-Bashir has been Sudan’s leader since 1989 and is wanted by the International Criminal Court in the Netherlands to face war crimes charges stemming from a conflict in his own country.