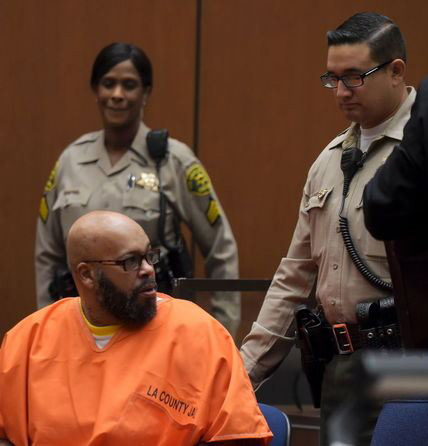 ONE-TIME rap mogul Marion “Suge” Knight formally changed his attorney on Friday in the murder case against him, bringing in the lawyer who successfully represented Michael Jackson when the late pop star was acquitted on child molestation charges a decade ago.
Knight, 50, appeared in Los Angeles Superior Court dressed in an orange jail jumpsuit accompanied by his newly hired attorney Tom Mesereau during a brief hearing.
The co-founder of Death Row Records has been charged with murder, attempted murder and hit-and-run for a Jan. 29 altercation outside a burger shop in Compton, a mostly poor suburb of Los Angeles.
Knight had been represented by attorney Matthew Fletcher in the case.
Mesereau, hired as Knight was seeking to have the case dismissed, told a judge he would need more time before he might potentially present that request.
“I would need to prepare and contemplate what the next move would be,” Mesereau told the judge, who set the next hearing for July 7.
Knight is already scheduled to return to court that day for a separate case of alleged robbery and making a terroristic threat that stems from the theft of a camera in Beverly Hills. Comedian Katt Williams is also charged with robbery in that case.
Mesereau represented the late pop star Michael Jackson when he was acquitted on all charges in a 2005 child molestation trial in Santa Barbara, California.
Knight is being held on bail of $10 million.
He faces a possible sentence of 25 years to life in prison if he is convicted in either the camera theft case or the murder case, prosecutors said.Advertisement