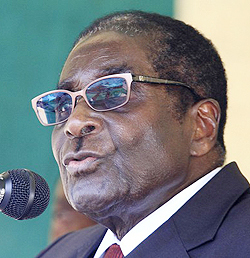 A TOP South African marketer has said Zimbabwe’s economy is suffering because business is led by politicians whose decisions set the wrong tone for investment.
Khethelo Mazibuko, who is managing director of Mind Asset Solutions in South Africa, was presenting a paper on marketing and politics at a conference of marketers in Victoria Falls on Thursday.
He said Zimbabwe’s mistake was that it was ruled by individuals who have no business background resulting in them pushing suicidal policies that scare away investors.
Mazibuko said the country’s business sector will likely collapse following the death of President Robert Mugabe because of over-dependence on politicians to set the agenda for business.
“Zimbabwe is where Germany was after Hitler and World War 2, it is torn and destroyed. It is you marketers and business people who should help the country, you should be in command of how politicians influence the day-to-day running of business,” Mazibuko said.
“Business has to stand up to the responsibility of making decisions because unlike politicians, they know the leverage of their products.”
Mazibuko urged marketers to be part of policy-making processes saying that was the reason South Africa had seen its former presidents Nelson Mandela and Thabo Mbeki leave office earlier to save business.
“That is why South Africa retired Mandela after one term and at the moment ANC will also have to retire Jacob Zuma before his term because we can’t have an individual to be the face of the country, what happens when he dies,” said Mazibuko.
Mazibuko challenged marketers to be credible to avoid being hijacked by politicians.Advertisement