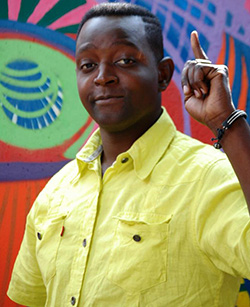 SULUMANI Chimbetu and ‘Dancehall Doctor’ Freeman arrived in the UK Thursday for a three-concert tour which kicks off in Luton on Friday.
Dendera Entertainment Directors spokesman, Steven “Papa Stavo” Chimbetu, confirmed the arrival of the stars, adding they had promised “unforgettable” performances for their UK fans.
Sulu, of the “Batai Munhu” fame is supported by his Orchestra Dendera Kings group and will give fans a taste of his new album during the tour.
“Sulu will also sample songs from his forthcoming album which is coming out at a time to be advised soon, and on the itinerary, we have a town that has not been included before on previous tours,” said Papa Stavo earlier this month.
After Luton, Sulu and Freeman will perform in Coventry on Saturday and conclude with a family show in Manchester on Sunday.
Steven said the shows will also give fans a chance to celebrate the life of Dendera founder Simon Chimbetu who died aged 49 in August 2005.
“(Simon) died in the month of August … so we said; why not give them (fans) the chance to celebrate the life and works of the founder of the genre.”
TOUR DATES AND VENUES
FRIDAY (29th Aug 2014)
Dunstable Leisure Centre Court Dr
Dunstable Luton LU5 4JD
9PM TILL 4AM,
SATURDAY 30th August 2014)
Platinum Demand Tower Street Coventry
CV1 1JN
9PM TILL 4AM
SUNDAY (31st August 2014)
Sol House Manchester
2pm till midnight
FOR more information please contact Papa Stavo on 07778620803, Zed Matsvetu on 07411479354 and Kenny G 07966721713.Advertisement