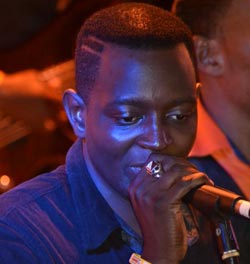 SULUMAN Chimbetu is being sued by his ex-wife who wants to more than double the child support the singer pays for their two minor children.
Chimbetu was ordered by a court last year to pay Marigold Mutemamasango US$1,000 every month – US$500 for each child.
She had claimed US$3,300, but Chimbetu had offered just US$140, declaring that he earned US$800 per month and had two other children he was looking after.
On Tuesday, Mutemamasango was back in court, this time seeking an upward review of the maintenance to US$2,200 for both children.
Magistrate Brighton Pabwe reserved his ruling.
Last year, Chimbetu went to the High Court to force Mutemamasango to return a lounge suite worth US$3,900 which she grabbed from his Haig Park house while he was away.
He told a court he bought the property on hire purchase and had not finished paying the monthly installments, and that his ex-wife was not entitled to it since she had moved out at the time it was acquired.
According to Chimbetu, he was customarily married to Matemamasango but the marriage broke down in 2009 when her parents took her away from the matrimonial home.
She returned at the start of 2012 but again the marriage hit the rocks in March of the same year. She returned to her parents’ home and initiated maintenance proceedings.Advertisement