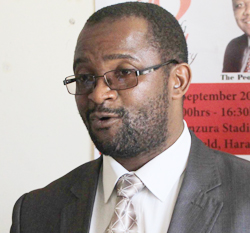 MY principals wanted to know why there was no roast last Sunday. First, we didn’t have enough swine, did we? Not quite enough infantile tomfoolery from the good-for-nothing morons running our beloved nation aground.
Apart, of course, from the Dear Leader wondering what Zimbabweans were suffering from; a rather stupid question when even a newly born can rattle off 91 reasons why the nation is in agony.
Second, writing is like sex; it can’t quite happen without adequate arousal, which of course brings me to the title of this post, or more precisely the ‘erection’ aspect of it.
Of course, there have been suggestions from the mischievous state media that the soldiers couldn’t, now, quite stand to attention in the Sea Legend’s private forests; that things don’t erect anymore. But Sunday Roast is not going to give credence to malicious rumours by the wicked.
We refer here to elections but use ‘R’ instead of ‘L’ simply because the latter letter does not exist in the Manyika vocabulary. You may rightly wonder why Manyika and not Shona. Well, we easterners insist on being distinct from that greedy lot responsible for our general woe. The distinction is critically important because those who accuse regarding certain national misdeeds and tragedies tend not to discriminate – itself a subject for another Sunday.
So we had the Sea Legend demanding erections or, if you prefer, ‘elections’ arguing that the Bone Collector had failed. Tsvangirai was of course responding to the President’s state of the nation address, which rather usefully reflected more the deluded state of his own mind.
But what elections does the Sea Legend demand when he has ruled out participating in any such contests until reforms are implemented to make HIM win – which every right thinking Zimbabwean knows Zanu PF will never do?
Yet, if I was Mugabe I would oblige Morgan and give him his desired ‘erection’ – see what he says after that. But I’m glad I’m not Bob, because then I would be 91 and having to suffer the ignominy of my Generals doing things (that I can’t due to age) to my significant other.
I mean, did you see the Bone Collector’s agonised look as the General ogled rather suggestively while the number one lady pecked her voluptuous hindquarters into the air, peacock-like, as she tried to sit down during the pomp and circumstance of Defence Forces Day?Advertisement

Sunday Roast is told the General’s stolen-from-a-footballer partner is not too enamoured of the number one lady. And who can blame the model girl when the General makes such as public spectacle of his wondering passions!