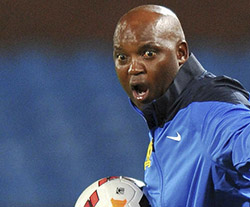 SOUTH Africa: Pitso Mosimane believes that Mamelodi Sundowns will be in the final of the Club World Cup, as they look to continue their impressive run in cup competitions.
Masandawana qualified for the continental showdown, which will take place in Japan from December 8 – 18, after clinching the CAF Champions League at the expense of Zamalek thanks to a 3-1 aggregate scoreline.
Upon arrival at the OR Tambo International airport on Wednesday, the Downs squad was greeted by hundreds of enthusiastic supporters, and Mosimane took the time to highlight his plans now that they have added the CAF Champions League to their trophy cabinet.
“I think it was the minister (Fikile Mbalula) or Dr Danny Jordaan (Safa president) who said maybe we will be in the final,” he told reporters.
“If you know my attitude, (you will know) I believe we will be there,” he said, referring to the Club World Cup.
The former Bafana Bafana mentor also dismissed suggestions made by Premier David Makhura, who stated that Masandawana could be forgiven for losing their Telkom Knockout tie against Polokwane City due to their hectic schedule.
“Sure we call the other local cup competitions sardines, but they keep us strong. Minister, we want to protect the Telkom Cup. I know the players want to keep the Telkom Cup,” Mosimane added.
“We are also looking forward to the (Caf) Super Cup. It might be TP Mazembe or some other team we will be playing. And that match will be played here, we will give it our best shot.
“I’m just humbled. Thanks Masandawana for singing for us, for supporting us. When you sang in that stadium we were humming with you in the stands. To see you in those stands opposite us was very encouraging,” he concluded.Advertisement