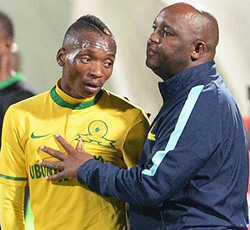 LEAGUE winning Mamelodi Sundowns coach Pitso Mosimane has confirmed that star player Khama Billiat is free to go overseas if the offer is right for the club.
Billiat has been in brilliant form for Sundowns this season winning both the Telkom Knockout and the Absa Premiership trophy with 13 goals and 20 assists in all competitions.
The Zimbabwe star is expected to make an overseas move and is likely to fetch a decent sum of money for the club.
Mosimane is aware it will be difficult to keep his most prized asset next season and will not stand in the way of career progress.
“You can’t stop Khama from going if millions of Euros are coming from the other side,” says Mosimane. “He has to go, why not?”
Meanwhile, Mosimane and Billiat celebrated their Absa Premiership championship triumph with Mamelodi Sundowns by winning the final Absa Premiership Coach and Player of the Month awards for the 2015/16 season.
The Mamelodi Sundowns coach has now been honoured a record six times with the award this season.
He accepted his award at Absa’s headquarters in Johannesburg when league winners Mamelodi Sundowns visited the Absa Premiership sponsors as part of their Champion’s Tour.
Victories over University of Pretoria, Bidvest Wits and Platinum Stars in May secured The Brazilians a new points-tally record of 71 in the Premier Soccer League era, during a season of complete dominance over their rivals, winning the title with a 14-point gap ahead of nearest rivals Wits.
Billiat was an overwhelming winner from a strong seven-player shortlist.
The skillful Zimbabwean attacking midfielder, a candidate for Footballer of the Season, provided three assists on the night Sundowns clinched the league title at AmaTuks on May 11, while he also scored two goals in the last two matches of the season in May.
The judges praised him for his consistent intelligent play and felt he was head and shoulders above his peers.
The Player and Coach of the Month were selected by a panel of judges made up of members of the media and football analysts. The panel was convened by Farouk Khan.Advertisement