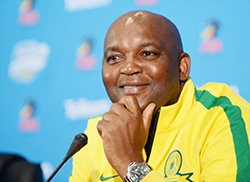 MAMELODI Sundowns coach Pitso Mosimane is confident of overturning the tables in the second leg after his side lost 1-0 to Zimbabwe champions Chicken Inn at the weekend.
The Brazilians gaffer believes that his side will reverse matters when the two sides meet in the second leg of their CAF Champions League clash.
Mosimane admitted that his side did not have the legs on Saturday, and said that the high tempo match against Orlando Pirates midweek and the heavy turf prepared for the game had taken a lot out of his charges.
“Yes, we lost the match, but the round is not lost. We will have to do the business at home (in two weeks’ time)” Mosimane told his club’s official website.
“Even before the match, I spoke of the quality of Chicken Inn, so we knew what we were up against. We had noted that they had beaten sides like Highlanders and Dynamos.
“Khama (Billiat) complained about a tight hamstring after the Pirates match, while Debnnnis (Onyango) suffered a knee injury – that is why I did not field the two,” Mosimane said.
“Then we had to substitute Teko Modise at half time because his legs could not carry him through. Leo Castro and Keagan Dolly also struggled with the pace of the game,” he said.
Counter attack game
“Chicken Inn looked a lot sharper than us. They sat back and waited to catch us on the counter, and we were aware of this tactic, but eventually they did get the break.
“We played a whole lot more on the counter, and opened up a lot as we attacked them in search of the away goal. But we just did not have the legs to sustain this,” Mosimane said.
In the early part of the game, the two sides exchanged attacks, and was evenly balanced as both sides went out for a goal.
Both sides had scoring chances, but it as the hosts who came closest with an effort in the 17th minute, signaling their intention to grab the lead.
An injury to Asavela Mbekile did not help Mosimane’s cause, and in the 36th minute, Inn striker Michelle Katsvairo beat Wayne Arendse’s tackle before driving the ball into the back of the net.
The Zimbabwean side held onto this lead through the half time break, and in the second half, seemed determined to defend their lead.
Mosimane brought on Cuthbert Malajila as his side went looking for the equaliser, while the Inn defence held tightly and created break opportunities.Advertisement

Even though the tempo of the game slowed down as Sundowns seemed to run out of steam, the Tshwane side still enjoyed much possession, using the ball to create movement as the made forays into the Chicken Inn third.
In the end, Sundowns had to be content keeping the score-line at 1-0, and start planning for the second leg at home.