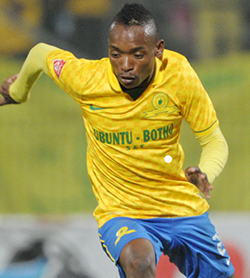 MAMELODI Sundowns playmaker Khama Billiat has stressed the importance of beating Kaizer Chiefs in the Telkom Knockout final, saying it could set the tone for the rest of the season.
The Brazilians will contest tournament honours with Chiefs at Durban’s Moses Mabhida Stadium on Wednesday.
Downs slipped up in the MTN8 Cup earlier in the season, but have since found their stride as a seven-game unbeaten run in the Absa Premiership leaves them three points behind leaders Bidvest Wits.
Pitso Mosimane’s men have also reached the TKO final in commanding fashion, memorably thrashing Free State Stars 6-1 in the second round of the competition on October 25.
“I believe that it is really important for us to win this cup,” Billiat tells KickOff.com.
“We’ve started our season really well in the league despite the disappointment in the MTN8, and we are heading in the right channel if you look at the log standings.
“Winning the Telkom Cup will be a big motivation and confidence booster for the league campaign and also the other cups like CAF and Nedbank Cup next year.
“Preparations have been great. We are ready and everybody knows what is at stake and what is expected from them. Hopefully all will be applied on the day.
“We are really looking forward to the game and it is a blessing for us to be in this final. But we know that for a team like Sundowns, a cup final appearance is not enough but we need to win it as well.”
Billiat recently recovered from a concussion sustained in a 3-1 league win over Stars, and naturally he is hopeful he can make his return in the showpiece fixture against Amakhosi.
“I am feeling well. I have fully recovered and have been training with the team.
“It feels great to be back in contention and I am ready to play if given the chance.”Advertisement