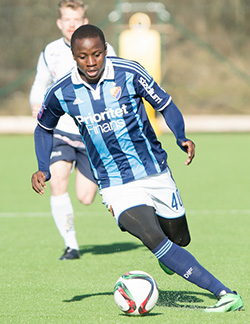 ZIMBABWE international striker Nyasha Mushekwi came as a second half substitute to score the priceless winning goal as Swedish side Djurgardens beat Helsingborg 1-0 at Olympia Stadium on Monday night.
The former Caps United striker, on loan from parent club Mamelodi Sundowns, is a regular at the club but started on the bench on Monday due to problems with allergies in the past weeks.
The powerful striker however, put all that behind him as he scored his 11th goal of the campaign since joining the Swedish side on loan from Sundowns a few months ago.
The goals represent quite a good return for a striker who only joined the club after spending most of last year battling with a knee injury which forced him to cut short his loan spell at Belgian club KV Oostende.
The victory lifted Djurgardens to fourth position on the league table.
His prolific goal scoring form has attracted the attention of European teams including English Premier League (EPL) side Leicester City.
Netherlands sides FC Groningen and SC Heerenveen, Bundesliga clubs Harmburger SV, FC Augsburg and FC Nurnberg have all reportedly shown interest to sign him on.
However, Mushekwi who was in Harare on a short season break, told reporters he would decide on his future when the season in Sweden ends in October.
Leicester survived relegation from the EPL last week with one match to spare.
The Zimbabwe international had been called up to the national team camp to prepare for the 2017 African Cup of Nations qualifier against Malawi but failed to turn up after picking an injury.
Mushekwi will now be considered for the next match against Guinea as Zimbabwe bids to qualify for their third African Cup of Nations finals.Advertisement