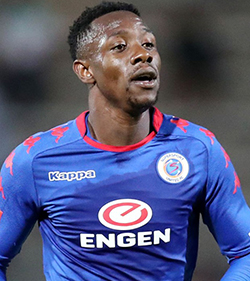 SOUTH Africa: New SuperSport United striker Evans Rusike says he will not put himself under pressure to play like Jeremy Brockie or to repeat the feats of the departed New Zealander.
Zimbabwe international Rusike was signed by Matsatsantsa from Maritzburg United after Brockie made a big move to Tshwane rivals Mamelodi Sundowns last month. He’s already found the back of the net, in a 4-2 victory over Bloemfontein Celtic in the Absa Premiership.
Brockie bagged 54 goals in his time at SuperSport, falling just three goals short of the late Abram Raselemane’s club scoring record.
“I can’t say I am replacing someone. Obviously when someone leaves, I come in and fill up the space. It’s the same when I left Maritzburg, someone must fill up the space,” Rusike tells KickOff