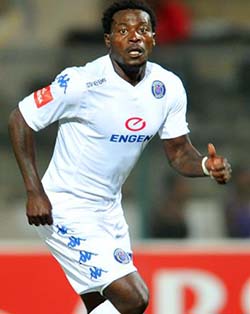 SOUTH Africa: SuperSport United striker Kingston Nkhatha expects a test in their final game of the year against Polokwane City at Lucas Moripe Stadium on Wednesday night.
SuperSport have their eye on the summit as they are three points behind log leaders Cape Town City, who they held to a 1-1 draw in their previous outing.
However, United, who lost 2-1 to the City Boyz in the Telkom Knockout final on December 10, are facing a Rise and Shine side that are exceeding expectations under Luc Eymael this season.
While Eymael’s men lost 3-2 to Kaizer Chiefs on Sunday, the team are fifth in the standings with 21 points from 14 games – a point behind Matsatsantsa.
“Polokwane City are on a fantastic form,” Nkhatha told his club’s website.  “There’s a lot of teamwork in their squad, that’s why they are fighting and pushing their way up.
“This is not going to be an easy one. We are also prepared for this match and want to give our supporters a nice Christmas present,” added the Zimbabwe international.Advertisement