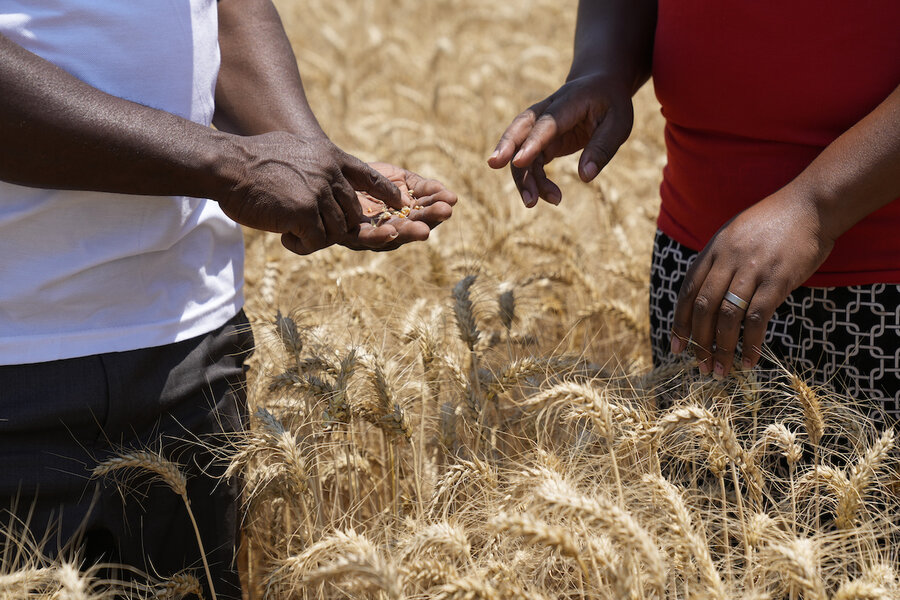 By Farai Mutsaka I Associated Press

Zimbabwe says it is on the brink of its biggest wheat harvest in history, thanks in large part to efforts to overcome food supply problems caused by the war in Ukraine. But bush fires and impending rains are threatening crops yet to be harvested.

Like other African countries, Zimbabwe has for decades relied on imports to offset low local production. After Russia’s invasion of Ukraine resulted in global shortages and price hikes, the country wanted to ensure “self-sufficiency at all costs,” Deputy Agriculture Minister Vangelis Haritatos told The Associated Press this week.

“We are most likely to get the highest tonnage since 1962, when wheat was first introduced to Zimbabwe. A lot of countries are facing shortages, but the opposite is happening in Zimbabwe,” Mr. Haritatos said.

While other hunger-stricken African countries are struggling with reduced wheat imports due to the war in Ukraine, Zimbabwe is looking at using its anticipated surplus of the grain to build “a small strategic reserve” for the first time in its history, agriculture minister Anxious Masuka told journalists earlier this month. This would cushion Zimbabwe against future shocks.

Masuka said Zimbabwe plans to bump up wheat production to about 420,000 tons next season, giving the country room to keep building its strategic reserve and become an exporter of the grain. Wheat is Zimbabwe’s most important strategic crop after corn.

African countries – which imported 44% of their wheat from Russia and Ukraine between 2018 and 2020, according to U.N. figures – were hit hard by the global shortages and price hikes of grains as a result of the war. The African Development Bank has reported a 45% increase in wheat prices on the continent.

African nations were at the center of Western efforts to reopen Ukraine’s ports as the United States and allies accused Russia of starving the world by denying exports from Ukraine, a key global grain exporter. African leaders also visited Russia to meet with Putin over the issue.

Zimbabwean President Emmerson Mnangagwa in April described the war in Ukraine as a “wake-up call” for countries to grow their own food.

The answer in Zimbabwe has been to empower local farmers, said Mr. Haritatos, the deputy agriculture minister.

That included roping in hundreds of small-scale, rural farmers to start growing a crop that was traditionally reserved for large-scale commercial farmers, improving water supply infrastructure, and distributing fertilizers to small-scale farmers as well as increasing private-sector participation. The crop was introduced for the first time to areas and farmers who had never grown wheat before.

Winter corn production has given way to wheat in many areas, with Zimbabwe banking on corn reserves to meet demand for the staple food. Land used for growing wheat increased from 66,000 hectares (163,089 acres) in 2021 to 75,000 hectares this year and will grow to 100,000 hectares next season.

“A lot of countries discount small-scale farmers because they are so small that individually they cannot effect much change,” Mr. Haritatos said. “But we organized them into clusters and convinced them that it was possible. The quality of most of their crops is premium.”

He said the war in Ukraine had made Zimbabwe “realize that we shouldn’t rely on other countries for food that we can grow on our own.”

However, Zimbabwe’s wheat is predominantly soft, and there is a need to blend it with imported hard wheat varieties to produce quality flour for bread, according to the Grain Millers Association of Zimbabwe. But the government has ruled out imports amid the surplus, saying a special permit would be needed.

The wheat harvest runs from October to December. However, both farmers and the government are concerned by the threat of raging bush fires and imminent rains. They say the fires are more devastating than in previous years as climate change contributes to an extended dry season.

“Farmers are increasingly getting worried about the time factor. It looks like the rains will be upon us soon. Wheat should be out of the fields,” said Paul Zakariya, director of the Zimbabwe Farmers Union, which represents small-scale growers.

Officials said bush fires destroyed wheat worth nearly $1 million in a single week in mid-October. Zimbabwe is amid the “fire season,” characterized by severe heat and strong windy and arid conditions that precede the rainy season.

The government says it has deployed more combine harvesters to help farmers speed up the harvest and is carrying out fire prevention awareness programs. The country’s environmental management agency has described bush fires as “one of the greatest environmental challenges of our time.”