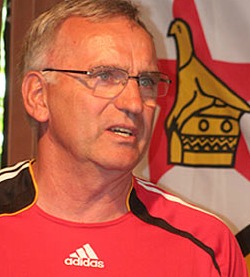 HOW Mine forward Simba Sithole received a surprise call up to the Warriors on Tuesday after FC Platinum’s Ali Sadiki withdrew from the squad owing to injury.
Warriors team manager Shariff Mussa said: “We have received a report that Ali Sadiki is injured and in his place the coaches have called up Simba Sithole of How Mine. We hope we don’t get any more injuries.
“The players are likely to play for their respective clubs in midweek before they release them. Ideally they should just release them to camp.”
Mutasa who will take charge of the Malawi tie in the absence of head coach Klaus Dieter Pagels who will be away in Germany attending to family commitments has named an 18 man squad that includes FC Platinum forward Charles Sibanda .
Highlanders goalkeeper Munyaradzi Diya who has cemented his place as the first choice goalkeeper ahead of Ariel Sibanda has also been called up.
Big Caps United striker Tawanda Nyamandwe and Dynamos defender Ocean Mushure and midfielder Devon Chafa are also in the squad.
The Warriors coaches will use the match as part of Zimbabwe’s preparations for the match against Egypt next month as well as the Cosafa Castle Cup in Zambia and the African Cup of Nations Championships (CHAN) qualifiers in July.
The Warriors are set to leave for Malawi on Thursday morning by road.
Meanwhile, Zifa have pegged the rest of ground tickets for the Egypt match – set for the National Sports Stadium – at $5 with bays 15 and 18 costing $20 while the VVIP enclosure will cost $50.
SQUAD