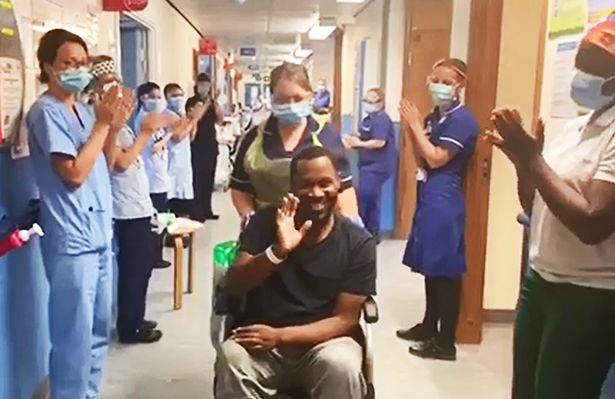 Covid-19 survivor Joel Chigome has made a heartfelt plea to the BAME to get tested and vaccinated after he spent three weeks in intensive care on a ventilator battling the virus. He is seen here leaving hospital being clapped by hospital staff.
Spread This News

The Zimbabwean health care assistant says he owes his life to those who cared for him as the virus attacked his body, stole his breath and nearly killed him.

When he gets the call, he will make his appointment and have the vaccine. His concern is those in his community and other black and minority ethnic groups that haven’t and won’t take up the offer.

“When I see that there are people that say no to a vaccine and I nearly died I think there is something I must do to tell people, have the vaccine.

“Our communities are suffering, I nearly died, I know people who have, this is a chance to stop that, we must take it.”

Dad of three Joel, was born in Chatsworth, Zimbabwe, and came to the UK in 2002 for education. He has worked in health care in and around Leicester for 15 years and lives near to New Parks.

“Even my daughter said to me about a video she has seen scaring people about the vaccine, these messages were out there before even the vaccine was.

“They are on WhatsApp groups in communities, Facebook groups, they are everywhere and people believe them. Covid-19 kills, not the vaccine, the infection.

“I want to use my experience to tell people to ignore those videos and to have the vaccine, it could save your life.”

Concerned by the results of recent University of Leicester research that showed vaccine take up among BAME health care staff had been low, Joel, 44, felt compelled to do something so he recorded a video for LeicestershireLive to share.

“I must tell people, they need to know that this virus, it nearly killed me. It could kill them, their family, their mothers, fathers, brothers, sisters, children.

“I can’t sit by and see people turn down the vaccine. And it is not just in the Zimbabwean community, other black and minority communities are also not accepting the offer and they are vulnerable, they must see the good it can do.

“Leicester is multicultural, it has been in lockdown for the longest time, we need to get the message to everyone that this vaccine protects us all.”

Joel, a dad of three and health care assistant, fell ill with the virus not long after the first national lockdown.

“I started off thinking I had a cold but was soon very poorly. It was so bad one day that I crawled out of bed to the phone and rang for an ambulance to come and get me. I don’t remember a lot after that.

“I was in intensive care at the Leicester Royal Infirmary for three weeks, I heard voices saying I was on a ventilator and at that moment decided I had to live.

“I was seeing my children, when they were very young, my mother in Zimbabwe, images from my childhood, my late father was there. It was vivid, they were waving. My father wanted me to go to him.

Over time, Joel’s condition improved and he was able to breathe without the ventilator, but his battle was not over.

“It is nearly a year and I am still recovering. For weeks, I could not even lift a finger, I had to learn to walk again, I had to be washed, to be fed. I still cough now.

“My lungs are not fully recovered but I am alive. The staff at Leicester Royal Infirmary saved my life. I will never forget that.

“The Zimbabwean churches in Leicester and online and particularly Pastor Mberi of Jubilee Worship Centre are owed my thanks. People prayed for me, they cared for me, they have supported me.”