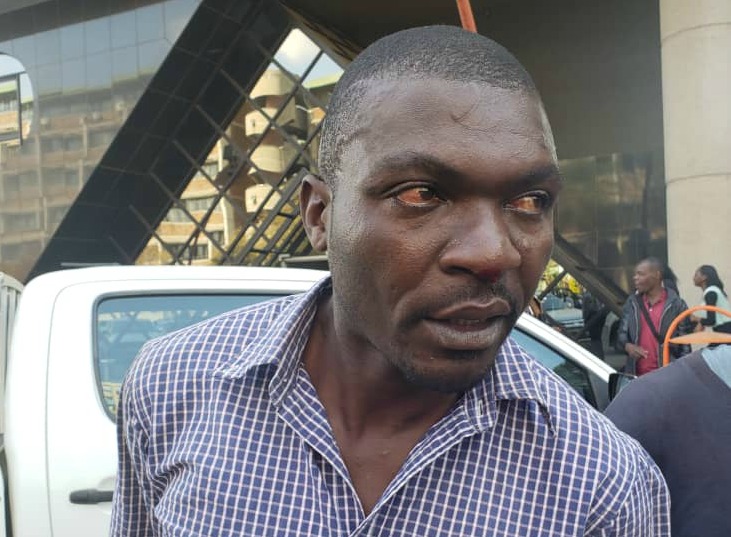 A SUSPECTED car thief was thoroughly bashed by a mob on Monday as he was caught trying to drive off in a VX V8 Toyota Land Cruiser belonging to a government official.

The government official, who works for the District Development Fund (DDF), James Jonga had gone into the bank around midday on Monday.

A Blessing Tuwara, as the suspected thief was later known, was not too lucky as he found opening the driver’s front door.

Witnesses say Tuwara wrestled with the government official’s assistant who first saw the incident while parked in another vehicle closeby.

Within a few minutes, a crowd had gathered to witness the drama.

When NewZimbabwe.com arrived at the scene, Tuwara was lying on the pavement with head under one of his apprehenders’ foot until Jonga returned from the bank.

The mob started clapping and kicking him all over his body until a police officer arrived to save him.

“Rakazara maronda muviri wese, mapanga oga oga (Look at him, he has some knife scars all over his body) and does not even have a US dollar in his pocket, how much do you sell your vehicles?” shouted one man.

Jonga spoke to the news crew and had this to say, “I went into the bank and left a colleague in the other car. The suspect got into my car but my assistant was in the car jumped on him and wrestled with him. The scuffle attracted attention from the public leading to his arrest.

Amid a harsh economic environment, some Zimbabweans have resorted to theft in order to survive.