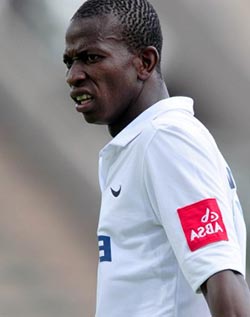 FORMER Kaizer Chiefs and Wits defender, Thomas Svesve, feels that Zimbabwe Football Association (Zifa)’s failure to deal with the Asiagate issue, has dragged his career backwards.
Svesve is one of the 15 individuals handed lifetime bans by Zifa for their alleged involvement in the match-fixing scandal that rocked Zimbabwe football in 2009.
The 32-year-old defender appealed the ruling in 2012, and has been waiting for the outcome of with no avail.
“I feel angry because the process has taken longer than what we expected,” Svesve told the Daily News.
“Obviously my career took a knock when Zifa announced those bans. At that time I was a regular with Kaizer Chiefs and then all of a sudden the club decided to let me go.”
“Even the Chiefs fans were surprised by the decision to let me go because they felt I still had a lot to offer. Right now I need to plan for my future and I need to hear what Zifa is saying but we are getting no response,” added Svesve.
Sweswe said he planned to travel to Harare this week to speak to Zifa president, Cuthbert Dube.
“For me to get justice I think I will have to meet Cuthbert Dube and try to get to understand what Zifa is doing with my appeal.”
“I just want to meet with Dube and have a one-on-one chat with him and hopefully then I might know what is really going on,” concluded Svesve.
Meanwhile, Mpumalanga Black Aces defender, Method Mwanjali, is also waiting for Zifa to make a ruling on the match-fixing appeal.
Mwanjali was also implicated in the match-fixing scandal and was subsequently banned by Zifa.Advertisement