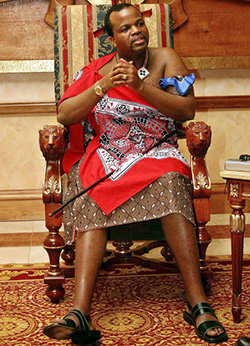 THE 46-year-old monarch of Swaziland, King Mswati III, has married a 19-year-old virgin, making her his 14th wife, as tens of thousands of young half-naked girls danced in front of the king at the wedding ceremony.
About 80,000 young women participated in the annual dance event, known as Umhlanga or Reed dance, said the palace. However, the actual number of women who took part in the ceremony is being contested.
According to reports, the women were topless and wore nothing more than beaded belts, which covered only their private parts while fully exposing their buttocks.
Photography was prohibited and one photographer who attempted to take pictures was removed from the palace.
The dance ceremony was declared a national holiday and all schools were shut in the tiny African nation.
The last wife of King Mswati III was chosen in a similar ceremony last year and their marriage has been officially announced only now by the reclusive African kingdom.
The new wife was seen seated with her fellow wives in traditional attire.
It is not clear whether the girl, a former beauty pageant contestant sometimes referred to as “Naughty Sindi”, is the monarch’s 14th or 15th wife, as the royals do not explicitly announce their number of wives.
Some media reports also suggest that she is not a virgin and had dated two of the king’s sons – Prince Majaha and Prince Bandzile.
An unidentified source told the Sunday Sun: “Sindi has dated both these boys. She’s a party girl used to having fun.”
Another source was quoted as saying: “Sindi is no virgin. She drinks and smokes a lot and has tattoos on parts of her body I cannot mention.”Advertisement