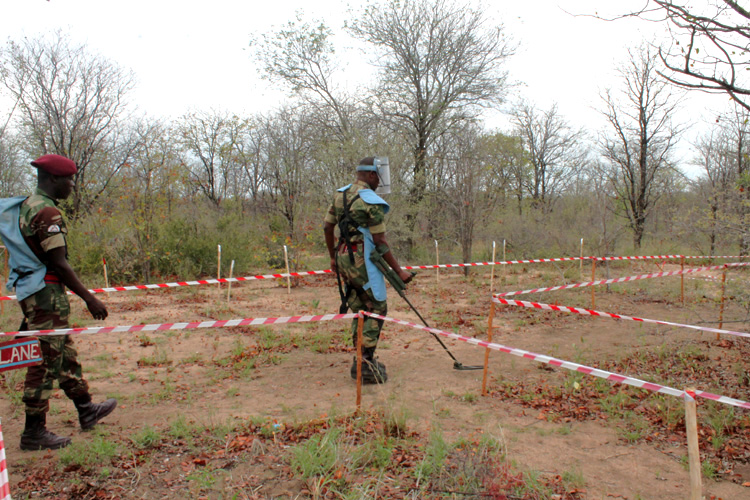 SWITZERLAND, through the Swiss Agency for Development and Cooperation (SDC), has provided US$1 million to APOPO Mine Action for clearing a dense minefield in the Sengwe Wildlife Corridor in Southern Zimbabwe for the next two years.

The project, meant for the safe return of land to the local communities is set to save lives and improve safe access to agricultural land and conservation in the area.

In a statement, the Swiss Embassy in Harare said through the new initiative, at least 1 630 419 square metres of land will be made safe for local communities and wildlife in the area.

The new intervention builds on an earlier phase implemented in 2020 that cleared 1 093 152 square metres of the same minefield.

“Southern Zimbabwe faces numerous challenges due to the existence of landmines laid four decades ago which have imperilled the lives of both people and animals. The project enabling development through Landmine Clearance in the Sengwe Wildlife Corridor will create a safe passage for local communities as well as tourists while reducing human-wildlife conflict,” the Embassy said.

“Landmines will be cleared in the Great Limpopo Transfrontier Park that combines three unique national parks: the Limpopo Park in Mozambique, the Kruger Park in South Africa, and the Gonarezhou Park in Zimbabwe before engaging the surrounding communities in agricultural activities,” it said.

The project is also set to complement Zimbabwe’s efforts of becoming a landmine free zone by 2025 which Switzerland has been supporting through the Geneva International Centre for Humanitarian Demining (GICHD) and the Zimbabwe Mine Action Centre (ZIMAC).

Through this close partnership, GICHD has supported ZIMAC to develop and launch the Zimbabwe National Mine Action Strategy 2018-2025 which outlines Zimbabwe’s trajectory for landmine clearance obligations outlined under Article 5 of the Anti-Personnel Mine Ban Convention.

The ambassador of Switzerland, Niculin Jäger, said: “The Government of Switzerland is proud to support APOPO’s demining activities in the Sengwe Wildlife Corridor as this will help the local community regain their economic footing through accessing previously contaminated land for agricultural production – something that they have not been able to do for the past 40 years. The process will also support greater opportunities for transnational tourism between Zimbabwe, Mozambique; and South Africa.”

According to SDC regional director of Cooperation, Manuel Thurnhofer, “Switzerland is working with Zimbabwe to build a brighter, productive and safer future. We are very hopeful that the project is going to reduce the ever-increasing number of human-wildlife conflicts in southern Zimbabwe and increase job opportunities.”

Tesfazghi Tewelde, the APOPO Mine Action regional manager for Africa, said “APOPO appreciates the Government of Switzerland’s continued commitment to our vital humanitarian work in Zimbabwe, and for its ongoing support to improve food security and livelihoods of these vulnerable communities in southern Zimbabwe. The support will maintain mine action as a critical enabler for the safe return of land to both humans and wildlife, and above all will save many lives.”

The Sengwe wildlife corridor is a critical passageway for the migration of elephants as well as endangered wildlife such as wild dogs in the region.

The presence of landmines has been causing accidents and preventing animals from migrating out of Gonarezhou, leading to overpopulation which in turn puts pressure on the fragile ecosystem and inevitably leads to human-wildlife conflict.

Removing landmines will allow conservation authorities to achieve a balance between conservation and better land use by local communities in the area.

Zimbabwe is one of the most heavily mined countries in the world, where landmines have killed more than 1,500 people and 120,000 head of livestock since independence in 1980.