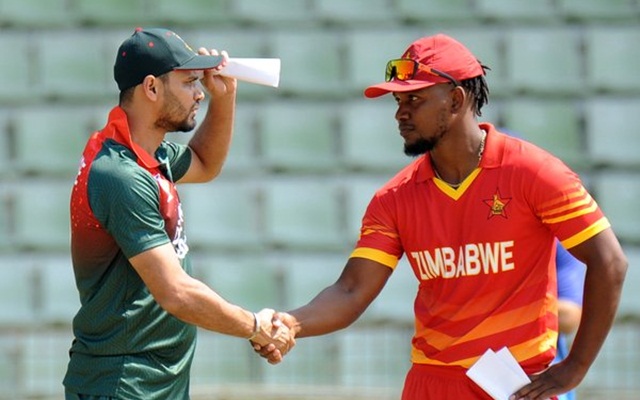 But replays showed Tigers wicketkeeper Nurul Hasan had taken the ball in front of the wicket, meaning the delivery was a no-ball and the players – many of whom had shaken hands and left the field – were called back.

Only four runs were now needed, and the final ball a free hit, but Muzarabani failed to connect with spinner Mosaddek Hossain’s delivery, meaning Bangladesh were able to celebrate for a second time.

The win gives Bangladesh, who had reduced Zimbabwe to 35-4 before Sean Williams’ brilliant 64, a chance of reaching the semi-finals.

They climbed to second in the table but will have to beat India or Pakistan, possibly both, to qualify.

Zimbabwe, who shocked Pakistan in their last game, would have put themselves right in the mix for a qualification spot with a win but will now likely have to beat Netherlands and India.

Later in Perth, Netherlands were eliminated following defeat by Pakistan, who kept their slim hopes of progressing alive.

After losing four wickets in the first six overs, Zimbabwe looked out of the match only for Williams to reignite their hopes and repel an energised Bangladesh, led by seamer Taskin Ahmed’s 3-19.

Left-hander Williams was seemingly taking his side to victory until he was brilliantly run out by Shakib al Hasan in the penultimate over. The Tigers captain had one stump to hit after swooping to field in the covers off his own bowling and nailed his throw on the turn.

Next man in Brad Evans was caught with five balls to go but four leg byes, followed by a six from Richard Ngarava, swung the game again.

Five were needed from two balls but Ngarava was stumped before the chaos of the two ‘final’ balls, a situation reminiscent of 2022 T20 Blast final won by Hampshire.

“We all were nervous,” said Taskin. “It was the first time I saw something like that [no-ball].

“It was a very good match, it wasn’t easy for us.”