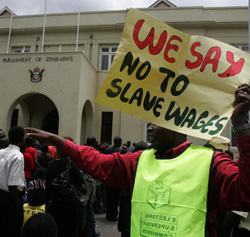 ZIMBABWE’S efforts to re-engage and seek debt relief from multilateral lenders may be an exercise in futility due to government failure to contain a bloating wage bill and recurrent expenditure, an economic think tank has said.
Last year, finance minister Patrick Chinamasa undertook to cap the wage bill at between 55 to 65 percent this year from 78 percent and to 40 percent in 2015 after government committed to an IMF staff monitored programme.
But in his 2015 budget announcement, Chinamasa said wages took up 82 percent of government revenue and that recurrent expenditure next year would consume 92 percent of the budget.
Labour and Economic Development Research Institute of Zimbabwe (LEDRIZ) director Godfrey Kanyenze told The Source on Thursday that limited fiscal space, which resulted in the crowding out of social spending and capital projects would lower Zimbabwe’s chances of getting financial support from the IMF.
“What is happening is that we are moving in the opposite direction simply because revenues are declining while expenditure is spiking. The biggest challenge for government is not doing anything to deal with expenditures,” Kanyenze said.
“At the end of the day one can say government has no appetite, political will and courage for reforms resulting in parastatals being heavily dependent on treasury and that’s the tragedy.
“The outcome of this is very simple. It doesn’t hurt the IMF because it’s us who want to re-engage with them. So it simply means there will not be any re-engagement.”
Zimbabwe in June last year undertook an IMF staff monitored programme (SMP), an informal and flexible instrument for dialogue between the Fund staff and a member country on its economic policies.
Although Zimbabwe missed key SMP targets, the IMF expressed satisfaction with Harare’s commitment and agreed on a new monitored programme which is expected to lapse next October.
According to estimates of expenditure, government expenditure will continue to trend upwards against advice from the International Monetary Fund.
The budget allocation for the office of the President and Cabinet is expected to grow to $227 million in 2016 from $206 million in 2014.
The defence budget for next year is expected at $389 million next year from $368 million this year before rising to $424 million in 2016.Advertisement

The ministry of health on the other hand has been allocated a $357 million budget next year, which is also expected to rise to $374 million in 2016.