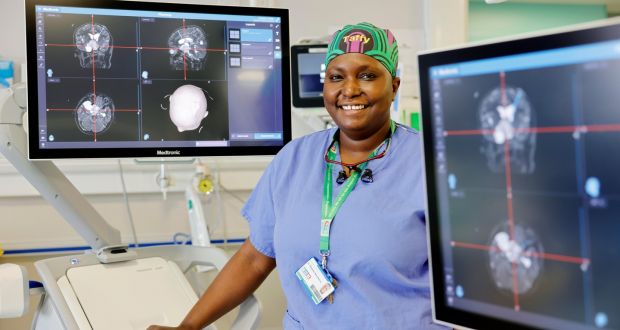 Tafadzwa Mandiwanza says that growing up in Harare, the capital city of Zimbabwe, she always wanted to be a doctor.

Having just been appointed as the first female paediatric neurosurgeon in Ireland, she is quietly proud of her achievements. “My mum is a nurse and my dad remembers me telling him when I was three years old that I was going to be a doctor,” says Mandiwanza, as we sit chatting in the board room of Temple St Children’s University Hospital about her experiences of being a brain surgeon. “My parents fostered that ambition.”

Following her medical studies at University College Cork, she initially thought she wanted to be a cardiothoracic (heart and lungs) surgeon but during her surgical training at Cork University Hospital in which she completed a subdural haematoma (a procedure which removes blood from the brain to relieve pressure), she changed her mind.

“I was 25 and I had to drill holes into the skull to open the lining (dura) of the brain to let out fluid which lessens the pressure. The procedure took less than one hour, but I was amazed that I could do it even if the registrar was scrubbed up next to me the whole time.”

Mandiwanza says she loves being in the operating theatre. “You can just focus on one thing. Every surgeon is a perfectionist. You have to be slightly obsessive, but most of us are critical of ourselves as well,” she says, explaining how she imagines every single step of the procedure a few times before doing any operation so that she has the mental space to deal with the unexpected. “I remember watching a surgeon in Cork and saying afterwards how [the procedure] was flawless and beautifully done and he said to me that he had done that operation nine times already (in his head) on that particular patient.”

She laughs when she says that as a person, she loves order. “If things are disordered, my thought processes don’t work as well. My family tease me about how I like everything to be tidy in the house.”

Although brain surgery is one of the most traumatic types of medical intervention – and none more so than in the child – Mandiwanza says that she likes working with children and feels great empathy for families. “We see children with devastating injuries and horrible traumas, but children are very resilient and they have a much greater capacity to recover and bounce back than adults do.”

“It’s hard as a parent to be responsible for someone else’s child yet I feel I can be more empathic because I am a parent too. I give parents the time to process what is happening and talk through the operation and its risks and complications.”

She recalls a very sad case when she was a registrar in which a two-year old child died following a malignant brain tumour. “I remember crying privately. Children scare a lot of neurosurgeons because it’s very high stakes. People ask how can you go home and look at your children after a day’s work? But I compartmentalise. It’s a survival mechanism. If I didn’t do that, I wouldn’t be able to function at home with my children.”

Acknowledging that female surgeons are still rare – she and Catherine Moran, an adult neurosurgeon at Beaumont Hospital – are the only two in Ireland, Mandiwanza says that she hasn’t felt discriminated against as a female consultant. “I’ve not had anyone say I don’t want her to operate on me, but when I was a registrar working with a male senior house officer (a more junior position), I do remember times when patients asked him questions and I had to reply, I’m the one operating on you.”

As a trainee she says she felt there was a boy’s network, but as a consultant, she feels an equal part of the team. “There are only four paediatric neurosurgeons, seven nurse specialists and one coordinator in Temple St. I love everyone here. It’s like a family, but we will all move to the new children’s hospital so (I expect) it will be like a big blended family when we get there.”

There were over 600 neurosurgical operations carried out on children in Temple St Hospital in 2021. These ranged from those for cerebro-spinal fluid disorders (such as hydrocephalus) and neuro-vascular disorders (such as brain haemorrhages) to neuro-oncology surgery (for brain and spinal tumours) to surgery following head injuries from falls from bicycles or trampolines. According to Children’s Hospital Ireland, no new child who is referred waits more than two weeks for an outpatient’s review and new urgent cases are seen on the same day. Temple St Hospital is the only paediatric neurosurgery centre in Ireland.

The day before we meet Mandiwanza was called back into the hospital at midnight after working all day. “A child had a brain haemorrhage and the pressure was building up. I got back home at 6.30am after the surgery and was back for the morning clinic from 10am-1pm.”

She laughs when I ask her how she unwinds following such busy and unpredictable work. “You get used to it. As trainees, we worked very long hours. You have to be resilient. I don’t know if I do switch off, but I love to cook – although I’m rubbish at baking.”

Looking back she says the busiest and toughest time was when she worked in Cork University Hospital for two years during her six years higher surgical training while her three children were young. She also completed extra training at Great Ormond St Children’s Hospital in London just before taking up her consultant post in Dublin so that she could bring new skills (such as surgery to treat severe spasticity in cerebral palsy) back to Dublin. “I was determined and organised, but a support network was essential. My sister-in-law moved to Ireland. We had au pairs and my husband, Rebabonye Pharithi, was working in Dublin at the time.”

One of her daughters phones her while we are chatting and she gently asks if everything is alright and says that she will phone her later. “I assuage the guilt of being a working mum by being a role model for my girls so that they can achieve whatever they want as long as they are decent human beings,” she says.

Living in Ireland now for 20 years this is definitely home for the Pharithi family. “Our children were all born here and they consider themselves Irish. My husband – who is from Botswana – and I were both naturalised in 2014.

Reflecting on her journey to become Ireland’s first female paediatric neuro-surgeon, Mandiwanza says, “I don’t think I’d be in this position if I hadn’t had the mentors that I had – people who had my back and offered me advice and encouragement. I’d like to be available now to mentor other neuro-surgeons – particularly women coming through those long training pathways.”

Are female surgeons different from their male counterparts? “We’re definitely more empathic and a bit less God-like. All surgeons have a certain amount of ego and you have to but female surgeons are more self-effacing. I’ve read that imposter syndrome is no longer a thing, but I have to remind myself on a daily basis that I am a neurosurgeon.”