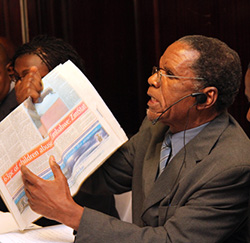 SHADOWY media platforms and faceless political formations have become essential in Western-sponsored psychological operations.
The project ‘Operation Shumba’, discussed in the last instalment, as well as the so-called G40 are examples of such platforms and formations.
What connects the so-called G40 to ‘Operation Shumba’ are not just the consistent and persistent attacks on war veterans, on the legacy of the liberation struggle and on Vice-President Emmerson Mnangagwa.
The deeper connection lies in the apparent logical move from ‘Operation Shumba’ to G40 which has been forced by drastic changes in the global and internal context of the struggle for the soul and wealth of Zimbabwe.
‘Operation Shumba’ was consistent with selling hopelessness and despondency in a situation where ZANU PF, President Robert Mugabe and the war veterans were viewed as just about to bite the dust of economic and political implosion inflicted through illegal sanctions.
The worst manifestation of that expectation was the widely circulated 2003 document called ‘Is Zimbabwe on the Brink of Genocide?’
The so-called ‘emerging economies’, Russia, China, Brazil, India, Iran, Venezuela, helped to nullify and defeat the media-orchestrated conclusion that indeed the Zimbabwe revolution was about to bite the dust of political and economic implosion. The West itself went into economic crisis.
And the large numbers of Madzimbahwe who had fled the country in fear of biting the reported dust of political and economic implosion began to question the greener pastures to which they had fled.
G40 is therefore a replacement of the former dust of political and economic implosion with a hollow, but freshly-baked and iced doughnut. The false cheer and false promise of G40 is meant to be as cheerful as the ‘Arab Spring’. G40 represents a localised escape.
The escape has to be internal, from Mugabe, the war veterans and Mnangagwa to some ill-defined ‘young turk’ whose main achievement seems to be the slogan that, “If you are not a millionaire by 40, then you are not smart.” ‘Operation Shumba’ was too external, too foreign-looking.
G40 will try to look as local as possible even though its Western connections are obvious. The hollow doughnut is still meant to make the West and its Cold War institutions look superior to China, India, Russia, Brazil and Iran.Advertisement

But this attraction to the West is no longer to be preached by the West itself, but by the young turks calling themselves ‘G40’. The attraction for the most part will be sold as inevitable ‘re-engagement’ without saying much about the terms of that re-engagement.
There are many reasons why G40 remains hollow. They include the following:
The money which the G40 are making and celebrating is centred on the US-Dollar whose many notes bear and celebrate images of North America’s war veterans and independence war heroes.
The North-Americans respect and honour their own war veterans and war heroes so much that they have put images of them on their money.
They will defend their war veterans as fiercely as they defend their dollar.
In contrast, the G40 decampaign their own Zim-Dollar the same way they now decampaign our liberation war veterans.
G40 represent sponsored economics which shuns the real economy of the majority and avoids thorough diagnostic studies of that economy, preferring instead to focus on what the IMF, the World Bank and other Cold War economic institutions teach.
As a result, all the projections of economic growth and economic recovery made for Zimbabwe since 2009 have been way off the mark. They have been baseless and over-optimistic because of the tendency to shun the real economy which the majority experience daily.
Those economic projections have routinely downplayed or underestimated the need for a national currency because the G40 are in love with the US-Dollar as a substitute for a national currency and they treat as disposable income what should in reality be our foreign currency reserves.
Those projections of economic growth and recovery since 2009 ignored critical factors such as the state of ZESA, the state of National Railways, former ZISCO Steel, the Grain Marketing Board and the absence of investment and liquidity in the agricultural sector.
Any platform which denigrates the legacy of the liberation struggle and questions the role of war veterans is valued by the West and the Rhodesian rump because it helps to defeat the African values which the ‘Operation Shumba’ document called the Fourth Chimurenga Movement’s narrative.
The G40 represent petty bourgeois, consumerist extravagance and a refusal to work and live within our own means.
War veterans are the only single grouping which has achieved a permanent and solid basis for the existence and sovereignty of Zimbabwe in the form of national independence and the subsequent land reclamation and land revolution.
No other singular grouping of Zimbabweans today can boast a comparable achievement yet. The G40 is valued by the architects of ‘Operation Shumba’ because it appears to be refusing to build on the foundations of Zimbabwe laid down by the war veterans.
It is determined to denigrate war veterans because the West wants it to depart from the path of Murenga.
This article was first published by The Patriot.