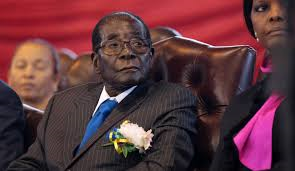 Zimbabwe’s former leader Robert Mugabe has been forced out but he’s hardly faded away. Ahead of this month’s historic election, dozens of people in T-shirts with his image danced to anti-government songs while vowing revenge. The 94-year-old Mugabe, who led this southern African nation through 37 turbulent years before his dramatic, military-backed resignation in November,