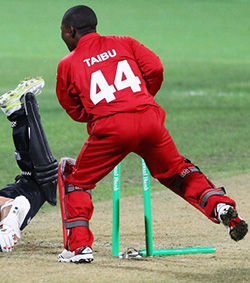 UK: While the current exodus of South African players to these shores has led to questions about the future of cricket on the Cape, one former Zimbabwe international is hoping his stay in England can help rejuvenate his country’s prospects.
Tatenda Taibu, who captained the Chevrons ten times in his Test career, is set to launch a new cricket academy to help the brightest young prospects from his country develop their skills in his adopted home of Merseyside where the 33-year-old is once again behind the stumps after joining Liverpool Competition side Hightown St Mary’s.
Following a topsy-turvy career in which he became Test cricket’s youngest ever skipper before twice announcing his retirement, Taibu finally waved goodbye to Zimbabwe in 2012 pledging to do “the Lord’s work”.
After a move to Crosby, he ended up at Hightown’s picturesque Sandy Lane last year and led the side to promotion to the Liverpool Competition’s First Division, with 737 runs at 52.64.
“Initially, I just wanted to come over and work on my autobiography but I decided to play a bit of cricket, too, and went to the internet to find a club who were looking for a player,” said Taibu.
“I spoke to three clubs but I really liked what Hightown had to say. I don’t normally go with whoever is offering the most money and, for me, it’s more about the relationship so that’s why I decided on them.
“Sandy Lane is different to the famous ground in Worcester but that’s what it reminded me of and the players and the community have also been so lovely which has really been a plus.
“It is always the hope that you’ll meet nice people, especially when you’re moving with your family, and the schools around Crosby are some of the best I’ve ever come across so it’s really helped the family to settle and feel part and parcel of the community.”
What makes Taibu’s move to Merseyside all the more remarkable is that the wicketkeeper/batsman has also agreed to take on the seemingly impossible task of resurrecting Zimbabwe’s international prospects after being put in charge of both player selection and player development.
With finance problems, player strikes, lack of facilities and a sparse fixture list waiting, it appears fortunate that Taibu is a born optimist.
“It’s going to be hard but I’m sure with the team I’ve got around me I’ll be able to manage,” he said. “With any sport, if you can sort out the playing field you have half the issues sorted. The way I’m going about it is to sort out the playing fields and the number of players first. Whilst doing that I’ll also sort out the structures of our cricket and make sure the administration side of things is smoother.Advertisement

“I think how long it takes is dependent on how people take on the ideas I have got. We need to move along together so the moment I get everyone buying into the structure that I want to put in place, the quicker we will be able to get back to where we are supposed to be.”
Help is available in the form of team coach, Heath Streak, who was Taibu’s captain on his Test debut, and ex-South Africa Test stars Lance Klusener and Makhaya Ntini.
“I’ve managed to sit down with several former players,” said Taibu who concedes there are many remaining issues when it comes to the relationship between the Zimbabwe board and its charges.
“We want to look in from outside and see where we are going and once we get a feel for it they will jump on the bandwagon straight away.”
Crucial to Taibu’s plans is his academy, which he hopes will help to re-establish Zimbabwe internationally by giving youngsters the chance to develop both personally and professionally outside their homeland.
There will be coaching and mentoring sessions, with matches against county academy or development squads. With games in midweek, selected players will also have the chance to turn out for local club sides at weekends.
“Now that Zimbabwe is making its way back in world cricket, we must strive to improve our performances at all levels and the next generation of talent is a crucial part of this,” he said.
“Some will be experiencing overseas conditions for the first time and it will be a valuable education for them. If these guys can thrive in English conditions, it will be a huge boost to their confidence and career and, who knows, maybe turn them into stars of the future.”
The academy is being run in partnership with Crosby-based Flash Sports, which will be providing administration and logistical support as well as helping players to link up with club sides across the North-West.
As for his promise to carry out the Lord’s work following his retirement from playing, Taibu is keen to clear a few things up: “People don’t understand when you leave behind a lot of money.
“They assumed I was going to be a pastor or something like that but that was never the case. All I wanted was to have a closer relationship with God and have peace in my heart.
“When I go in a certain direction I go all out and when I was trying to find peace in my soul and make my way in my sporting career, I found a lot of contradictions.
“I was trying to go one way and being pulled in another so I decided that one had to go and I decided that was cricket. To me, Christianity is just my everyday life – you don’t take a break and it is an ongoing thing.”
The one thing the overworked Taibu doesn’t seem ready to commit to is an international comeback as he readies himself for Hightown St Mary’s new season playing in Division One of the Liverpool Competition.
“It is very competitive and most games are very closely contested,” he added in a fervent defence of league cricket.
“I’m really looking forward to the new challenge and it will be tougher this season but the guys I worked with last year are beginning to understand a bit more about their game.
“But as for playing for Zimbabwe, I think that is a door that is going to remain shut.
“I want to keep my eyes on the doors that are opening.”
This piece is taken from The Cricket Paper