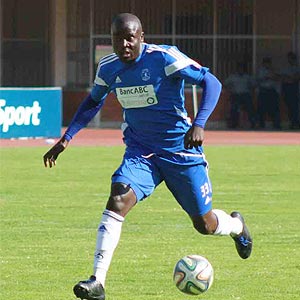 DYNAMOS forward Takesure Chinyama has demanded to be released from his contract, reigniting rumours that he has set his sights at joining fierce rivals Highlanders.
Chinyama was earlier this year reported to have fallen out with Dynamos coach Paulo Jorge Silva and has not been training with the club.
While Silva claim that Chinyama is injured, the 33-year-old disputes the claims, saying he is fit.
The big forward was earlier this year linked with Highlanders but then appeared to have settled to continue at Dynamos where his contract is set to expire in June.
After being omitted from Silva’s provisional 26-man squad, Chinyama requested to be released and Dynamos chairman Kenny Mubaiwa said they are yet to make their mind on the player.
“What is confusing us is that the technical team is saying that he is injured but we spoke to him last week and he told us that he is fit. It just shows that something is not right between him and the coaches,” Mubaiwa said.
“We would want to sit down with him again together with the technical team and maybe they can iron out their differences. If we fail to reach common ground we would be left with no choice but to let him go as he wishes because he told us that he wants to leave. But we hope he stays.”
Chinyama’s issue comes at a time when Silva is desperate to find a new striker for a squad that has so far this pre-season exhibited serious attacking frailties.Advertisement