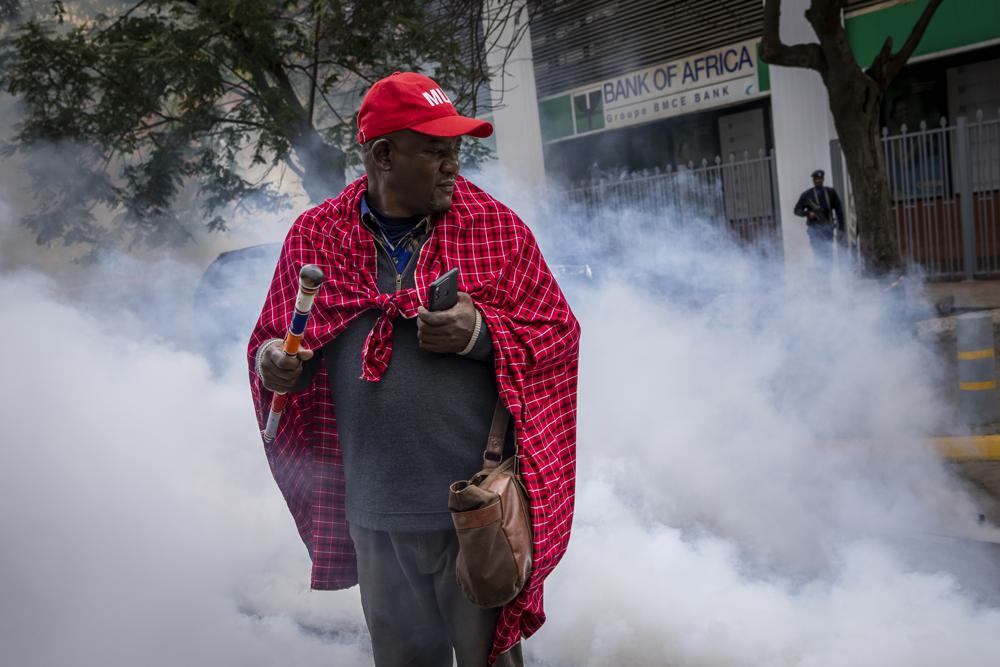 NAIROBI: Tanzania’s government has been accused of using violence against Maasai herders protesting efforts to evict them from one of the country’s most popular tourist destinations, in the latest friction between those who see certain African landscapes as a lucrative playground and those who simply call them home.

Witnesses of the confrontations in the Ngorongoro area told The Associated Press that some of the wounded people fled to neighbouring Kenya to seek medical care, fearing retaliation from Tanzanian authorities. Video shared with the AP shows Maasai taking cover amid gunfire and tear gas, and others injured.

“We saw many people being beaten,” said Stephen Parmuat, who said he helped carry some of those wounded across the border after the confrontations late last week. “For now, the situation is still bad. We don’t know what’s next. Many people are displaced. We don’t know where to go.”

A Tanzanian advocate for the Maasai told the AP that 20 people arrested, including political leaders, were charged with murder on Thursday at the Resident Magistrate’s Court in Arusha without advocates being notified, contrary to procedure. The AP saw a copy of the court documents, with many of those charged described as “peasants.” Speaking on condition of anonymity out of fear of retaliation, the advocate asked how so many people could be charged with the murder of the one police officer that authorities said was killed.

A call to the court in Arusha was not answered.

The confrontations, which erupted after Maasai community members noticed Tanzanian authorities marking off land reportedly for a game reserve, occurred just days before the East African Court of Justice is set to rule next week on the merits of a case filed by supporters of the Maasai against Tanzania’s government.

The government was served notice of the upcoming judgment, and lawyer Donald Deya wondered whether Tanzanian authorities were trying to pre-empt it by marking off the land.

“In 2018 the court issued an interim order that stopped the government from doing exactly the kind of things it’s doing now,” said Deya, who leads the Pan African Lawyers Union. “Do not evict Maasai, do not touch disputed land. These actions of the government are in contempt of court.”

Human rights lawyers in Tanzania were searching police stations in the region for more than 30 people, including Maasai leaders, allegedly detained amid the confrontations, he said.

A march by a small number of Maasai in Kenya’s capital, Nairobi, to the Tanzanian embassy on Friday was broken up by police who used tear gas and arrested a national community leader.

In order to take land in the public interest, Tanzanian authorities must consult communities and give justification, Deya said. He doesn’t believe that has occurred, and he warns that a court decision favoring the Maasai could be followed by a public campaign pressuring Tanzania’s government to respect it.

“Embarrassment might stop them,” he said, adding that some “tourists want to have exclusive use so they don’t have to run into cows.”

Tourism is a major source of income in Tanzania, which drew global attention when its previous president, John Magufuli, largely denied the presence of COVID-19 and urged tourists to keep coming to the East African nation.

The confrontations in Ngorongoro district led to an outcry among supporters of indigenous communities in general and of the Maasai, many of whom are employed in the safari industry in both Tanzania and Kenya.

Several United Nations human rights experts in a joint statement on Wednesday said they were “deeply alarmed” by the reports of Tanzanian security forces using live ammunition and tear gas against the Maasai and protested “continuous encroachment” on their ancestral lands.

The entire Ngorongoro Conservation Area is a UNESCO World Heritage Site, and the U.N. experts urged Tanzania’s government to make sure any plans for the area meet human rights standards.

The African Commission on Human and People’s Rights this week called on Tanzanian authorities to “halt the ongoing forcible eviction.”