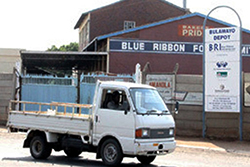 HARARE: Tanzanian milling giant, Bakhresa Group is set to inject $20 million into Zimbabwe’s second largest food and milling company, Blue Ribbon Industries Limited (BRI) to settle its debts and restart the insolvent firm once creditors vote in favour of the takeover.
Blue Ribbon, which collapsed due to liquidity challenges, was placed under provisional judicial management in 2012 and subsequently into final administration in 2013 to pave way for new investors as the company’s capacity utilisation declined to an all time low of 11 percent in 2009.
The company ceased operations in 2012 and only resumed last June after securing a supply agreement for raw materials with Mega Market while waiting to court new investors.
In 2013, Bakhresa emerged the biggest contender among three bidders seeking a 75 percent stake in the troubled firm but the deal was stalled for close to two years due to delays in indigenisation approvals.
Zimbabwe’s indigenisation laws limit foreign-ownership in local firms to 49 percent and Bakhresa’s 75 percent stake, at the time, had to be negotiated with government which only approved it this year following the interventions of the industry ministry and the central bank.
During a scheme of arrangement meeting of creditors held at a local hotel on Wednesday, creditors voted for either the takeover or liquidation of the company and the results will be announced on Friday.
Should they vote in favour of the takeover, the firm, which is saddled with a $29 million debt, will see most of its creditors being paid off, including the workers.
The creditors include PTA Bank which is owed $2,4 million; FBC Bank $1,1 million; Atlas $7,4 million; workers $1,1 million, statutory bodies close to $700,000; ZB bank $7,6 million and concurrent creditors $8,8 million bringing the total to $29,4 million.
BRI judicial manager, Reggie Saruchera of Grant Thornton chartered accountants urged creditors to vote in favour of the deal which would see Bakhresa inject an initial capital of $20 million of which $12 million will be used to pay off creditors.
The investment will be increased in the next six years to $40 million to replace aged equipment.
“The total owed to creditors in your company is $29 million and Bakhresa will put in $12 million and an additional $6 million is being put to also deal with the immediate working capital requirements to get the business running again,” he said.Advertisement

Best option
“In the next six years they are looking at investing up to $40 million. They have to go for the complete overhaul of the business.”
Saruchera said the deal presented the best option.
“We waited for three and a half years. We searched high and low for an alternative investor and there was none,” he said, adding that even local investors who wanted to take over the business had no capacity.
“Blue Ribbon requires real money for it to take off.”
Once the creditors give their nod, the scheme is expected to be implemented this month while the handover-takeover will be completed by November this year.
Saruchera said between $10 million to $15 million is required for raw materials such as maize and wheat to run the company at full capacity.
“There is real money required and that is why we thought Bakhresa would do the deal for us,” he said.
Shareholders get a dollar
Once creditors have voted in favour of the takeover, secured creditors would get 90 percent of what they are owed while the unsecured including workers would get 15 percent.
Previously creditors had voted overwhelmingly in favour of Bakhresa and so Saruchera was optimistic that the deal would sail through.
However, he said shareholders would get a dollar since the company was insolvent.
“I don’t know how they will share a dollar but this will enable Bakhresa to take ownership,” he said.
Should creditors opt for liquidation, secured ones such as PTA Bank and FBC Bank will get 90 percent of what they are owed, Atlas 30 percent, employees 62 percent, ZB Bank 20 percent, statutory bodies 80 percent and unsecured creditors nothing.
BRI has three subsidiaries namely Blue Ribbons Foods Limited, Nutresco Foods and J.A Mitchell.