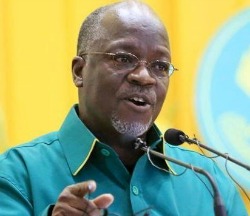 WHAT shall we call John Magufuli, the new President of the republic of Tanzania? An African hero? Perhaps, but the trouble with the cliché African hero is that it refers, mostly, to a man frozen in collective nostalgia and maybes.
In the universal mindscape, an African hero is an angry man who calls a spade by its name, denounces imperialists, gets popular and gets killed in the process and before achieving his goals.
Thereafter, his followers mourn about how the imperialists sponsored the assassination of their hero and imposed their puppet. That man will usually have been born and educated during the colonial era.
Typical African heroes are Thomas Sankara, Muammar Gadaffi, Patrice Lumumba, Steve Biko, Kwame Nkrumah and many others like them. These are the men who either got into power through angry denunciation of enemies and or through blazing guns. They spoke their mind and they indeed met death or whatever fate through outside manipulation. The people loved them and still do and to the extent that they have become symbols of quiet African confidence and defiance.
For years now, Africans have been complaining about how they have been let down by their leaders who, unlike dead heroes such as Lumumba, seem not to understand what the people want and how to move the continent forward. Even the Ibrahim Mo Award was introduced in the backdrop of a tendency by African leaders to cling on to power or offend and abuse their subjects as soon they have assumed office.
But Magufuli seems to have brought in a new way of doing things. The new Tanzanian leader was indeed born during the colonial era but he doesn’t seem to be a typical African hero. He has offended many yes but not in the sense that other leaders have: he has made lazy and corrupt people’s lives difficult. Unlike his fellow African leaders, Magufuli hasn’t attacked western imperialism. He, instead, is targeting African laziness and corruption. Perhaps, he understands that when you are an African and you attack imperialism you are essentially attacking kingdoms and royalty and when you do such you are pulverised. You have no chance.
The typical African heroes were certainly intelligent and learned but they communicated their messages in a rather offensive way. In the film about the assassination of Lumumba, a former Belgian spy who operated in Congo at the time of Lumumba’s ascendancy refuses to apologise or accept blame for the role he played saying the slain first president of independent Congo “insulted” the Belgian King. It might be that Lumumba never insulted the Belgian king but rather expressed himself in a way that offended the courtiers.Advertisement

Unlike Lumumba and Sankara, Magufuli denounces bad tendencies and unwanted habits and not isms per se. Isms tend to have faces behind them and those faces tend to be powerful untouchables. Mentioning them is risky. Magufuli, rather than denounce individuals, simply acts against what he sees as wrong and there is no evidence that he has got a Godfather. He is simply his own man. By taking that path- a slight but carefully thought through drift from the common way of expressing oneself, Magufuli has become the most spoken about African.
Now, listen to the silence of the Western leaders and the African politicians! Both camps are confused. Magufuli is not one whom an opportunist (according to Malema) like Mugabe can call a sell-out and neither is he one whom the likes of Henry Kissinger can call an agent of post-colonial resentment. Instead, he is a man with a vision. The essence of that vision is that as Africans we should not celebrate our birthdays in stables and neither should we make merry when we haven’t bought medicine for our sick ones. What is there to celebrate? If there is can’t we celebrate through serving others instead of through dance and feasting? If we are to celebrate why can’t we do so as we work?
In just a few months into office, Magufuli has united the likes of Kissinger and the likes of Mugabe. Both camps don’t know what to do with Magufuli: they are united in shock! They can’t hate him and neither can they embrace him. The confusion around the Magufuli phenomenon was perhaps well captured by Charles Onyango-Obbo, editor of the Mail & Guardian Africa newspaper, who said the Tanzanian leader has, “turned out to be a totally unAfrican leader.”
But perhaps the most important thing that Magufuli has proved is that you can be a hero without insulting anyone. You can be exemplary without seeking to fix anyone. You can change the situation just by demanding that the correct thing be done. One can be a hero without having enemies. For example, while Mugabe needs imperialists, ‘sellouts’, Kalangas and ‘dissidents’ to prove his heroism Magufuli doesn’t need any of that-just his own ideas.
Magufuli has shown us that it is not good leadership to shout and swear. There is no need to wave fists, punch the air and swear. Even Jacob Zuma, who is probably the most ridiculed president in the world, understands that a leader must not insult anybody. Rather, he must be diplomatic. In diplomacy, one can express displeasure with particular individuals not by insulting them but by stating what is wrong. For example, it maybe that Magufuli resents neo-colonialism but instead of denouncing anyone he is cleverly destroying its comfort zones: the culture of dependency and corruption.
Unlike Onyango-Obbo, I choose to call Magufuli a new African. To those that seek to reverse corruption and promote exemplary leadership in Africa I say here is Dr. Magufuli! Let’s embrace him before he becomes a typical African hero! (a tragedy) Let’s not allow him to become corrupt and big headed. Let’s not allow him to see Kalangas instead of fellow citizens.
So far so good; viva Magufuli.
Mthulisi Mathuthu is a senior Zimbabwean journalist. Reach him through thuthuma@yahoo.com