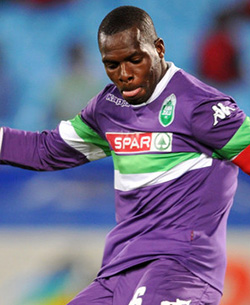 SOUTH Africa: Highlands Park goalkeeper Tapuwa Kapini is delighted to have turned the scales upside down last night by scoring a winner with a long-range effort.
The Lions of the North beat Ajax Cape Town 2-1 thanks to Kapini’s strike, but he declares that what matters most is that the team got three points.
Kapini’s clearance from just outside his box beat a badly positioned Jody February on the stroke of the hour to hand Gordon Igesund his first three points since his appointment in October.
Though Ajax disputed the goal arguing that it didn’t cross the line, what counts is that the referee and his assistant were in agreement that it went in as Kapini turned back the hands of time to 12 years ago when he made scoring similar goals a habit while playing for Highlanders back home in Zimbabwe.
“What matters most is that the team got the points in the bag,” Kapini tells KickOff.com.
“We needed the three points more than anything and we will take any win that comes our way. With regards to the goal, I have scored with similar efforts back home because I am always brave enough to take the risk if I spot the opposition keeper way out of his box.
“I am glad it was a goal that helped the team get the points on the day.”
Kapini is the second goalkeeper to score an Absa Premiership goal this season after Baroka FC shot-stopper Oscarine Masuluke became world famous for his bicycle-kick equaliser against Orlando Pirates at the end of November.
Highlands Park are off to Sisa Dukashe in Mdantsane, East London to face Chippa United in their next league match as they continue the search for points that will push them up towards safety.Advertisement