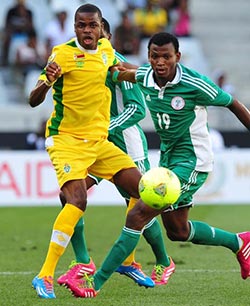 Zimbabwe 0-1 Nigeria
ZIMBABWE coach Ian Gorowa believes his CHAN players that move to South Africa’s PSL will benefit, but reminds them that their ambitions need to be towards Europe, like the West African players.
Gorowa’s exciting young Warriors team lost 1-0 to Nigeria to finish fourth overall in CHAN 2014 and won many admirers along the way, even FIFA President Sepp Blatter stopped and paid his dues to Gorowa in the media zone after the game.
“Your team played very well. Keep up the good work,” was Blatter’s comment to Gorowa.
Striker Simba Sithole has signed for Ajax Cape Town, midfielder Kuda Mahachi is set to finalise his Mamelodi Sundowns move and goalkeeper George Chigova as well as midfielder Ali Sadiki are in line for transfers too.
“Our team (Zimbabwe) is a good team and if the players can come into South Africa and add value to the league then so be it,” Gorowa says.
“You need foreigners coming into South Africa that are international players and our guys are ready and will add value; and I am hoping they will also improve their game playing there.
“Yes I think so. I think George (Chigova) will get a deal (in the PSL). It’s very rare to find such a goalkeeper and if he goes to Europe so be it, but if he uses the PSL as a stepping stone that is also good. He is good enough to walk into any team in the PSL now.”
Asked whether he felt the CHAN event gave him a better idea of which players to select and add to the core of his team who play club football in South Africa, Gorowa said: “As a coach of an international team like I am, you want a large pool of players and you want experienced players bringing back value from playing in big leagues.
“If you look at Nigeria they have many players playing in the top leagues in Europe and maybe that’s where we are lacking a little as the SADC region of Africa.
“Most of our players in this region play in the Arab leagues or in South Africa. So I think the more we are exposed to the highest leagues in the world, the more we can grow as the SADC region.”
Advertisement