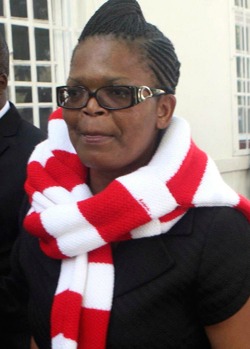 JUST over two weeks ago, Zimbabwe’s Prosecutor-General Johannes Tomana, a close ally of President Robert Mugabe, announced that the government intended to reopen its case against lawyer Beatrice Mtetwa, following her acquittal last November on charges that she had “obstructed justice.” This charge was the result of Mtetwa – a universally acclaimed human rights attorney and recipient of the International Woman of Courage Award – having the audacity to demand a search warrant during a raid on the home of a client in March 2013.
Given Zimbabwe’s well-documented history of human rights abuses, Mtetwa’s clientele has traditionally consisted of individuals who comprise the political opposition and civil society, thereby making her a target herself. In fact, as a result of her legitimate work, Mtetwa has been severely beaten and routinely harassed by Zimbabwe’s often partisan authorities, which remain loyal to Mugabe’s Zimbabwe African National Union – Patriotic Front (Zanu PF).
Last year, Mtetwa’s arrest and subsequent detention and trial were roundly criticized as a farce. The Committee to Protect Journalists stated in a letter to then-Minister of Justice and Legal Affairs that the arrest was an “affront to the constitution and legal system of [Zimbabwe].” The European Union expressed “deep concern” and both the Zimbabwe Lawyers for Human Rights and the Pan African Human Rights Defenders Network deemed the arrest “arbitrary.”
After 8 days in an overcrowded cell with no restroom facilities or outside light, Mtetwa was freed on bail. I witnessed the proceedings in the Harare High Court that day, as I was participating in an international human rights delegation organized by the Robert F. Kennedy Centre for Justice and Human Rights (RFK Centre). We arrived the previous day and, to a person, had committed to stand in solidarity with Beatrice.
The judge who then ultimately acquitted her last November said there was no legitimate case against her. In February of this year, the Commonwealth Lawyers Association (CLA) followed with their own assessment, affirming Mtetwa’s “arrest and detention were clearly an attempt to harass and intimidate her.”
At the time, I was overjoyed at the release of someone I consider to be emblematic of the larger struggle for the respect of human rights worldwide. However, I remained concerned that Mtetwa’s ordeal signified the pinnacle of a subtler shift in tactics to suppress perceived dissent in Zimbabwe. Indeed, while Mtetwa has in typical fashion vowed to fight the renewed and phony charges against her, I cannot help but see this sustained effort from Zimbabwe’s so-called guarantors of legal order as a calculated means with which to deter democratic actors from demanding and protecting their fundamental rights. It is clear that something larger is afoot in Zimbabwe, and has been so in earnest since the horrific electoral violence of 2008.Advertisement

Until recently, Mugabe and his allies in the military, police, and security forces mainly relied on brute force to preserve their grip on power. State repression is now concealed under the cloak of “public order” and the “rule of law.” This shift has not gone unnoticed by the Zimbabwean public. The World Justice Project, which bases its annual Rule of Law Index on how the public experiences the rule of law in everyday life, shows that Zimbabwe ranks at the bottom (97/99) of all countries surveyed in its recent report. Zimbabwe also registers a dismally low score in the 2013 Ibrahim Index of African Governance, ranking 45 out of 52 countries in its Rule of Law subcategory.
Declining rule of law scores in various surveys – regardless of how consistent – and harassment and incrimination of human rights defenders like Mtetwa will never attract the same international headlines that violence and bloodshed often do. In this sense, Mugabe and his cronies have learned a vital lesson for modern-day dictatorships: use the (partisan) courts and (equally partisan) state prosecutors, instead of the military and baton-wielding security forces, to stifle and deter the work of human rights defenders.
Recently, “obstruction of justice” charges have been filed or cases reopened against several others in Zimbabwe, including human rights lawyers Trust Maanda and Alec Muchadehama. The latter – who has represented several victims of state-sponsored abduction and torture – was acquitted two years ago, but his case is being re-examined by the Prosecutor-General who claims he is entitled to “challenge any decision in any criminal matter.” While some observers have characterized these moves by the government as indicative of a “new campaign”, recent history suggests otherwise. Indeed, let’s not forget that only a week after the July 2013 election, arrest warrants for some of Mugabe’s perceived top “opponents” were drafted and circulated.
At a time when the United States and other international actors should reengage and support Zimbabwe’s battered human rights community, there has been a steady reduction of available assistance. The United States Agency for International Development (USAID), for instance, plans a 44 percent decrease in funding for human rights and rule of law initiatives in southern Africa this fiscal year. This funding helps bolster the work of human rights defenders, and in the long-run provides a crucial bulwark against the type of dictatorship that Mugabe both exemplifies and inspires abroad. Repressive laws across the continent, from Zambia’s NGO Act and South Africa’s Secrecy Bill to Egypt’s anti-protest law, all drew inspiration from the stewards of the Zimbabwean regime.
By divesting in initiatives that empower the human rights community, we take our collective focus off the root causes of democratic backsliding in Zimbabwe and elsewhere throughout Africa— namely a declining respect for human rights, fundamental freedoms, and the rule of law. We also turn our backs on the genuine heroes of our time, those like Beatrice Mtetwa, who remain steadfast on the front lines advancing human rights, often at great personal peril. We can ill afford to let them continue in vain. As Beatrice Mtetwa once said herself, “This [work] has to be done. Somebody’s got to do it, and why shouldn’t it be you?”
Jeffrey Smith is the Africa Advocacy Officer at the Robert F. Kennedy Centre for Justice and Human Rights (RFK Centre). This article was first published by the Zimbabwe Human Rights Bulletin.