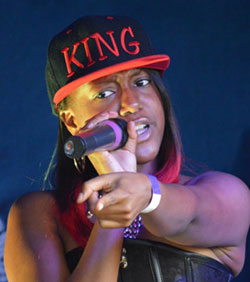 US-BASED rapper, singer, songwriter and dancer Tatiana Chipondaminga, better known by her stage name King Tatie was the star of the show at this year’s Southburgh Festival held Saturday in Norfolk, a low-lying county in the East of England
The festival, organised by Zimbabwe-born Anna Mudeka, was a sell-out event, bringing together a diverse mixture of international performers to Burton Manor Barns in the village, near Dereham, on Saturday.
While music fans enjoyed entertainment ranging from African rhythms to Caribbean reggae and folk, the festival’s workshops gave families the opportunity to try wood carving, drumming, pottery, circus skills, salsa dancing and storytelling.
The sell-out event enticed almost 500 people to the village, with 57 artists on the main stage, and another 39 on the smaller stage.
One of the stars of the show was 15-year-old Tatiana Chipondaminga, better known under her stage name of King Tatie, who moved to Los Angeles from West Sussex to pursue a career in the music industry. She agreed to play in Southburgh after meeting Mudeka in London.
The multi-talented rapper, singer, songwriter and dancer has already performed with hip hop star Soulja Boy in the US, but after a barnstorming show in the more genteel surroundings of rural Norfolk she assured her new fans in an adoring Southburgh crowd that her rise to fame wouldn’t stop her wanting to re-appear at the festival.
She said: “For me, I’m still like the new guy in LA, and it is just kind of fun for me to be back home in England. It definitely inspires me the way this festival is built. It is so different, that’s what I love about it. It is great for everyone to explore more different cultures.”
“Bow Down” King Tatie

Festival organiser Anna Mudeka says her aim is to raise money and awareness for the Mudeka Foundation, the charity she founded to help provide education for Aids orphans and disadvantaged children in Zimbabwe, where she grew up.
She said: “There are two very clear messages we want to put across. One is to raise awareness of the charity, and the next important thing is that we are trying to bring music and dance into rural Norfolk. Not just any music – but world music.Advertisement

“We believe we are bringing something unique to Norfolk, and we have everything from belly dancing to reggae and folk music. Our selling point is that it is a family festival where you can bring the whole family and everybody can take part.”
During the afternoon, the festival crowd was addressed by BBC correspondent Alex Dunlop, the Zimbabwe-born Look East presenter who is patron of the Mudeka Foundation.
He said: “Charities like Anna’s may be small but they cut out the red tape that all these other charities have to go through. The foundation is having a tremendous effect in Zimbabwe.”
King Tatie – I Got It Remix (Ashanti feat. Rick Ross & Future)