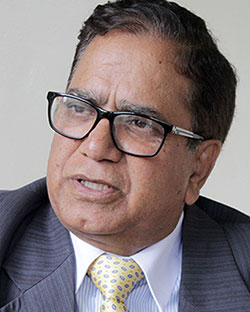 ZIMBABWE should extend technical support to its informal sector and not tax it to shore up its bare coffers as this will effectively destroy it, Indian ambassador Jeitendra Tripathi said on Wednesday.
India has one of the largest informal sectors in the world, making up half the economy and accounting for 90 percent of the country’s workforce. The country has, over the past three decades, been working to formalise the sector.
The Zimbabwe Revenue Authority (Zimra) is considering taxing Zimbabwe’s informal sector, which is estimated to constitute 85 percent of the economy, employing 60 percent of the country’s adult population, as the government desperately seeks to enhance its revenue.
Zimbabwe is battling a worsening cash crunch and relies almost entirely on tax collections, due to limited access to donor funds and external loans after falling out with the West over perceived rights abuses by President Robert Mugabe and Harare’s inability to service its debt to multilateral lenders.
But Tripathi, whose country’s economy is among those anchored by informal small to medium-scale enterprises (SMEs), said introducing taxes on small businesses would destroy their viability.
“It’s like killing the goose before it lays the eggs,” he told a business conference at the Zimbabwe International Trade Fair.
India has the second largest number of SMES in the world behind China.  Instead of taxing them, government must sponsor their activities to boost production, Tripathi said.
“Almost 90 percent of research to improve small business is taken care of by government (in India) and this is what you must do.”
His country is working with Zimbabwe to promote the sector, adding that the partnership will soon set up an incubation centre to offer local SMES support in the form of machinery.Advertisement