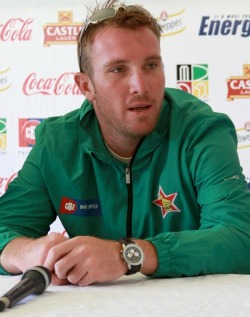 ROBSON Sharuko’s personal remarks on Ireland’s John Mooney after Zimbabwe’s ouster from the on-going ICC World Cup have come in for heavy criticism, forcing batsman Brendan Taylor to apologise on behalf of Zimbabwe cricket.
The report in question appeared in The Herald under the headline ‘Alcoholic dumps Zim out of WC’ and included personal attack on Mooney after his controversial catch to dismiss Williams helped the Irish team clinch a famous win.
Williams, who was batting on 96, was dismissed by Kevin O’Brien with Zimbabwe needing 32 runs off 20 balls. Mooney took the catch at deep mid-wicket with his foot almost touching the boundary ropes. The on-field umpires referred it to the third umpire who okayed the catch.
But the subsequent defeat was taken to another level by the report in Zimbabwe newspaper, which related the incident to Mooney’s personal battles with alcohol and depression.
“A shameless piece of fielding dishonesty that has soiled this global cricket showcase,” journalist Sharuko wrote in the report. “Is it possible for a person like Mooney to be trusted?” he added referring to Mooney’s personal troubles.
Understandably, the report was subject to Irish ire, with allrounder Niall O’Brien and Cricket Ireland chief Warren Deutrom launching a scathing attack.
O’Brien reacted strongly to the report throwing his weight behind his team-mate. “It’s disgusting to hear something like that. It’s a disgrace for somebody to come out with that about John Mooney. John is an extremely professional man and the personal stuff he has been through is just that, personal.
“He took a great catch on the day. If he knew he hadn’t taken it, there’s no way he would have claimed it. John is a very honest man and has worn his heart on his sleeve over the past 12-24 months and it’s something we all admire him for.
“He has been open about far bigger and more important issues than whether or not he took a catch, so to call his honesty into question is a very disappointing comment to hear.
“I think anyone involved in Zimbabwean cricket would be pretty ashamed of it,” the all-rounder said.
The Cricket Ireland chief executive Deutrom went a step further hinting that Ireland intends to take this up very seriously and possibly demand action.Advertisement

“It would be easy to dismiss it as a childish diatribe if it wasn’t for the vicious personal attack on John which cannot pass without comment, and possible action.
“John represents his country with honour, distinction and integrity. That he does in the face of personal challenges about which he has spoken openly and movingly demonstrates incredible hard work and great courage.
“In mocking John in such a contemptuous fashion, and using his personal difficulties as a mere punchline, the Zimbabwe Herald has demonstrated a breathtaking crassness and a gross error of editorial judgement,” Deutrom has said.
After heavy criticism, Taylor had to come out on Twitter to offer a public apology.
“On behalf of the Zimbabwe cricket team, we just want to express our apologies to @Irelandcricket and John Mooney for the unacceptable article,” the veteran batsman, who made 121 in the game, tweeted.
Zimbabwe lost the game by five runs.