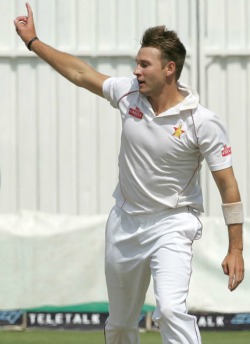 Zimbabwe 389 (Taylor 171, Waller 55) and 227 for 7 dec (Taylor 102*, Robiul 6-71) beat Bangladesh 134 (Jahurul 43, Jarvis 4-40, S Masakadza 4-32) and 147 (Cremer 4-4, Jarvis 3-75) by 335 runs
ZIMBABWE bowled a hapless Bangladesh out for 147 in their second innings to complete a massive 335-run victory in the first Test at Harare Sports Club.
The wining margin was Zimbabwe’s biggest in terms of runs and almost double their previous best of 183, achieved against the same opposition and at the same venue in 2004.
A century in each innings from captain Brendan Taylor provided the platform for the win, a personal triumph for the skipper whose leadership had been questioned, after the poor tour of West Indies earlier in the year.
Taylor posted his highest Test score of 171 in the first innings and added another 102 not out in the second, as Zimbabwe declared on 227-7 early yesterday and set Bangladesh 483 to win with almost two days to play.
The tourists never looked like chasing that down, as they were bundled out for 147 after tea, with only Mohammad Ashraful’s 40 offering any sort of resistance.
When he was needlessly run out, the tail folded quickly, with leg-spinner Graeme Cremer returning figures of 4-4. Kyle Jarvis was the pick of the Zimbabwe bowlers with match figures of 7-115.
It was Zimbabwe’s 10th Test win from the 90 matches they have played since the country was handed Test status in 1992 and brings to an end a run of five straight defeats.
“I couldn’t be happier today,” Zimbabwe captain Brendan Taylor said afterwards. “We showed a lot of character, coming back from our pretty average performance in the West Indies.
“We like playing at home and we understand the conditions pretty well. I think we were very professional in all three departments.
“They put us under a little bit of pressure up front with our second innings, but fortunately, we held it together and put up a tough target for them to chase.”
Bangladesh erred by not playing three seamers on a wicket with pace and bounce, and have plenty to work on before the second Test starting on Friday (NZT).
“The wicket was very good for bowling, but you still have to bowl well and hold your catches, and we didn’t do that in their first innings and allowed them to get to 389,” Bangladesh captain Mushfiqur Rahim said.Advertisement

“When we were then bowled out for 134, it is very difficult to come back from that.”

Record win … Zimbabwe walk off the pitch after the crushing victory